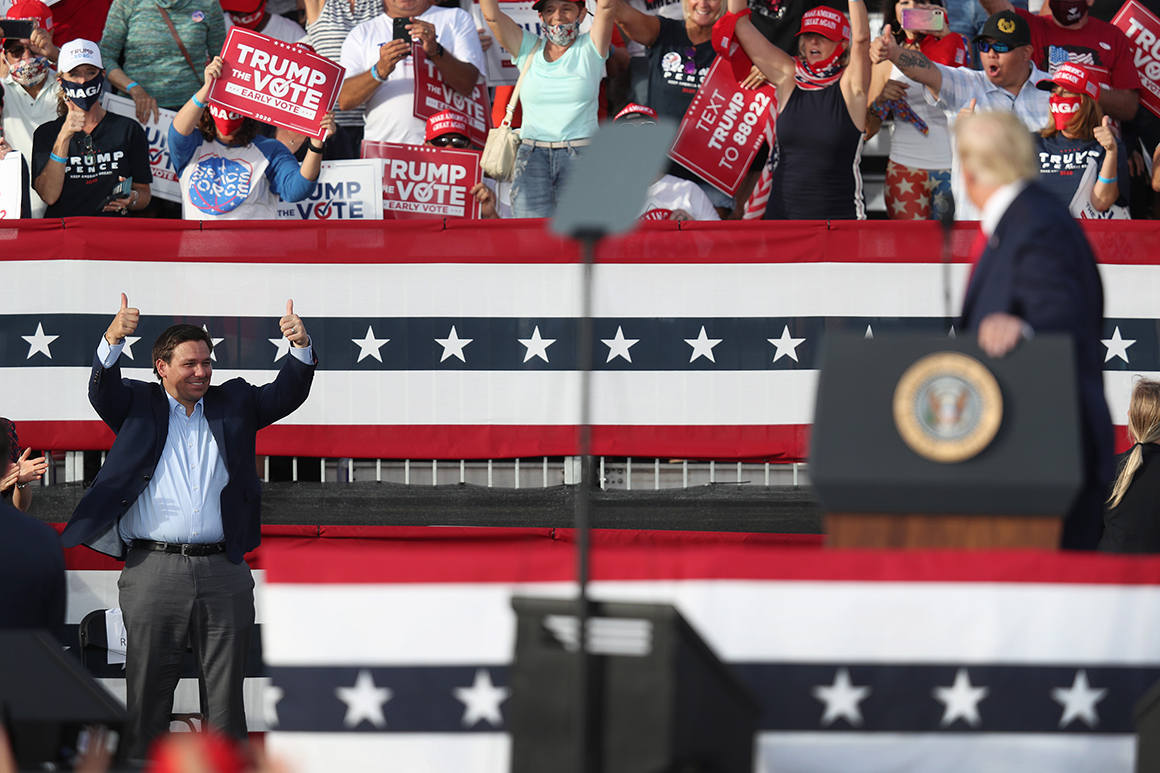 TALLAHASSEE — Florida Gov. Ron DeSantis is on a collision course with the most powerful man in the GOP: Donald Trump.

DeSantis is crisscrossing the country to deliver red-meat speeches. Iowa leaders begged him to visit. He just beat Trump in a key straw poll. And now the popular governor is getting close to overshadowing the former president in the 2024 presidential sweepstakes.

All of that could be dangerous for DeSantis’ political health, as Trump continues to ponder a new bid for the White House and remains capable of kneecapping any Republican he sees as a threat.

“It makes it difficult to openly start campaigning as [Trump] at least contemplates running again,” said Saul Anuzis, former chair of the Republican Party of Michigan, cautioning it’s still “early” in the election cycle. “It keeps activists on the sidelines.”

DeSantis, who has the benefit of claiming he’s just running for reelection, continues to gain accolades for opening up Florida during the coronavirus pandemic sooner than most large states. His frequent appearances on Fox News put him in the national spotlight almost nightly. Last weekend, DeSantis beat Trump 74-71 in the annual Western Conservative Summit’s straw poll in Denver — results that surprised even organizers of the summit. Last year, Trump won the same straw poll with nearly 95 percent support. 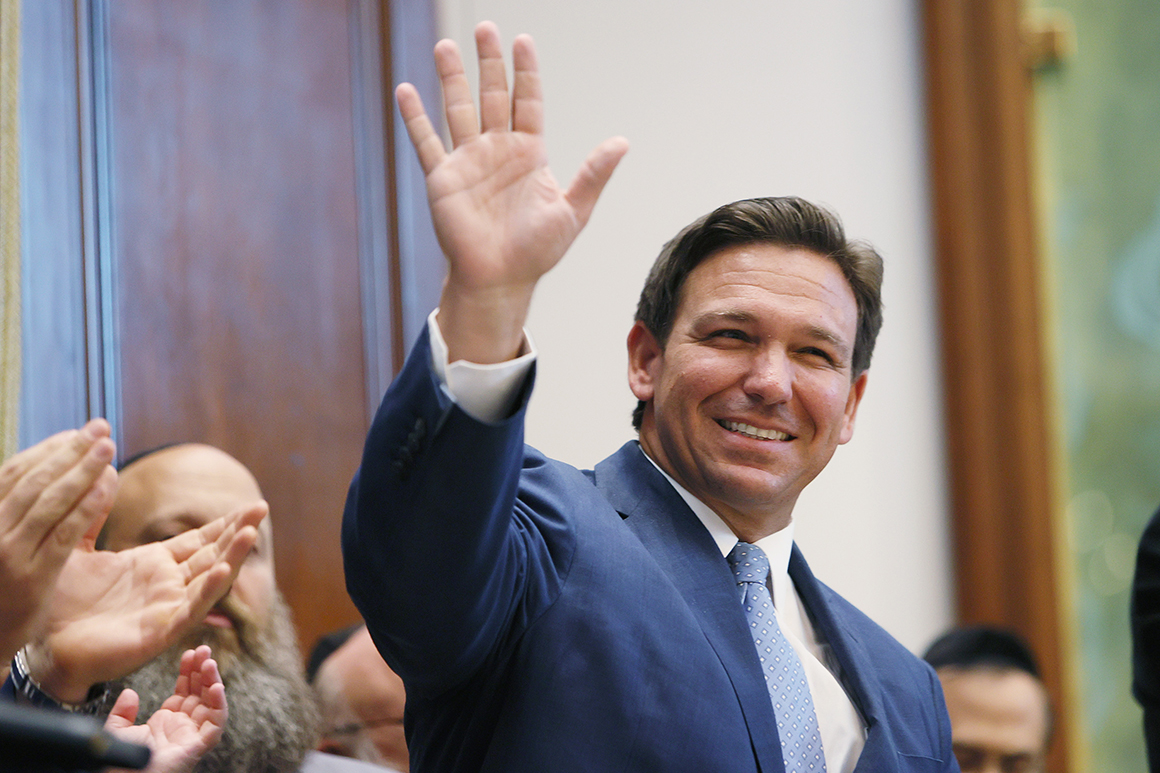 The governor’s backers say he is aware of the dangers of appearing to rise too quickly. One Republican consultant close to the governor, who spoke on condition of anonymity to speak freely about DeSantis and Trump, said the governor is “very wary” of eliciting the former president’s rage.

“He will take measures so that Trump won’t get mad at him, but believe me, the more successful you are, with Trump, sometimes makes it worse,” the consultant said. “It’s a weird spot to be in for sure.”

Trump is scheduled to hold a campaign-style rally on July 3 in Sarasota, Fla., one of a series of public events aimed at boosting the former president’s standing ahead of a possible 2024 presidential run. A Trump official planning the Florida rally told POLITICO that DeSantis’ team was contacted about the rally, but the governor’s office did not return a request seeking comment about whether or not he will be attending.

Trump remains the leader of the Republican Party, commanding loyalty from members and remaining active in congressional and statewide races as he weighs a 2024 comeback. But at 42, DeSantis represents a young, fresh face who presses similar conservative policies but with arguably more discipline than the former president. DeSantis has even started getting help from well-known Trumpworld figures, including former White House chief of staff Mark Meadows, who joined the governor on a west coast fundraising swing that included stops in Las Vegas and Southern California.

But the biggest question remains whether DeSantis will outshine the former president, and if that will in turn provoke Trump. The former president in April both took credit for DeSantis’ political ascension and seemed to tamp down the governor’s 2024 dreams when he told Fox Business host Maria Bartiromo that he’s considering DeSantis as his 2024 running mate.

“He’s a friend of mine. I endorsed Ron, and after I endorsed him, he took off like a rocket ship,” Trump said. “A lot of people like that — you know, I’m just saying what I read and what you read — they love that ticket… certainly, Ron would be considered. He’s a great guy.”

Meadows told the Washington Examiner in an interview published earlier this week that he doesn’t expect DeSantis to challenge Trump if the former president officially entered the race.

“That being said, Gov. DeSantis won’t even — he’s asked over and over and over again every time I’m in his presence — he’s been asked, ‘Are you running in 2024?’” said Meadows, who now works for the Washington-based Conservative Partnership Institute, a group DeSantis met with on Wednesday afternoon, according to a schedule released by his office.

Others within Trump’s orbit also downplay DeSantis’ national ambitions, saying that he is focused on his 2022 reelection as governor. 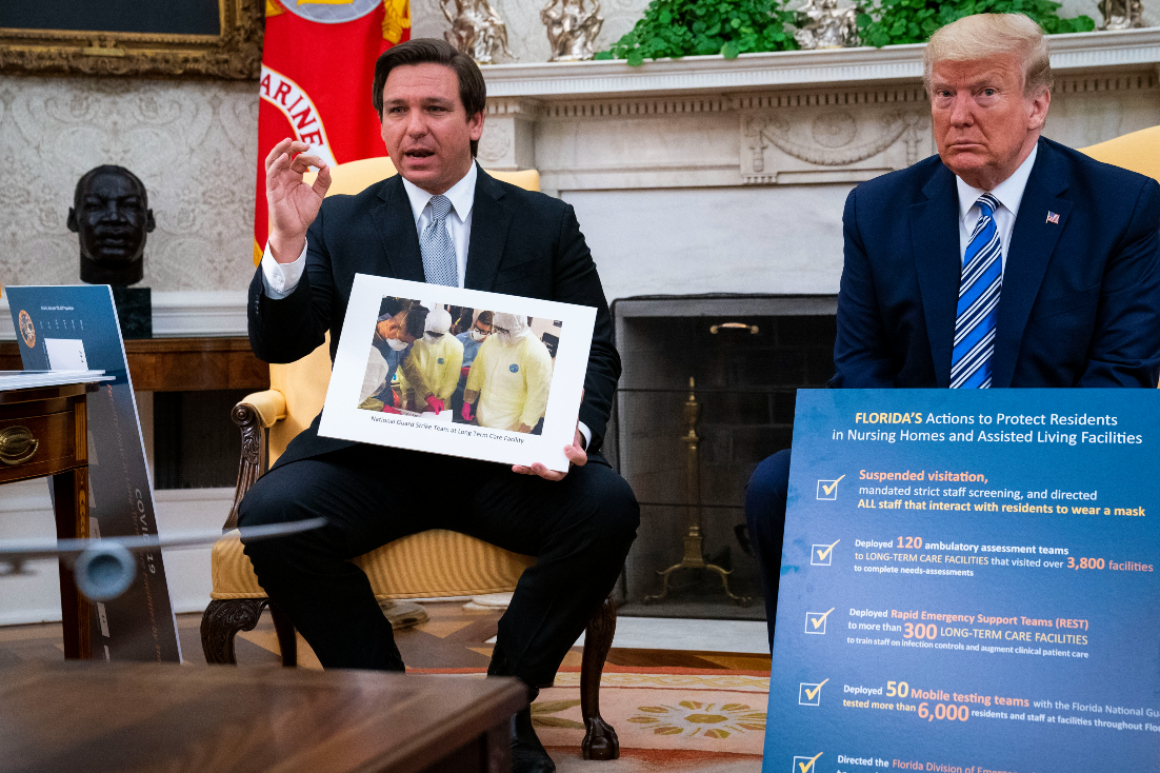 “Ron DeSantis is not focusing on the ups and downs of 2024, he is focused on making the state of Florida successful,” said David Bossie, head of Citizens United and a former Trump deputy campaign manager. “That means solely focusing on his re-election in 2022. He is not getting sidetracked by the chattering class.”

Florida state Rep. Anthony Sabatini, one of the GOP-led Legislature’s biggest Trump backers, said the former president’s influence over the early 2024 jockeying has set up a clandestine presidential campaign process.

“The reality is, right now, everyone has to run these kinds of secret, or indirect, presidential campaigns,” Sabatini said. “Of those trying it, I do think DeSantis has done the best job.”

Many in Florida politics point to the irony of the situation. Trump is largely responsible for lifting DeSantis’ profile and helping him secure the governorship three years ago. Trump’s 2018 primary endorsement helped DeSantis beat former Florida Agriculture Commissioner Adam Putnam, himself a former congressman who was supported by Florida’s entire Republican political establishment and a heavy favorite at the outset of the race. As governor, DeSantis has consistently pushed legislation that appeals to the conservative base and Trump, including a measure aimed at reigning in Big Tech and a bill that restricts some voting access in the state.

The two men, however, couldn’t be more different. Trump, a billionaire, has been a staple of reality television and tabloids for years and promotes himself has one of the world’s most successful businessmen while DeSantis is a civil servant whose only source of income is his $134,000 annual taxpayer funded salary.

Others, however, see Trump’s position possibly weakening as much of the nation moves beyond his presidency.

“Donald Trump was not as strong in his position as he was last year, which is getting a lot of attention and a lot of news organizations covering us,” said Jeff Hunt, vice president of Public Policy at Colorado Christian University who also helped organize last week’s Western Conservative Summit in Denver — which featured the straw poll DeSantis won. “It’s very clear Trump has strong control among grassroots conservatives, but what people are looking for is Trump presidency policies but with a fresh face, and Ron has done a good job doing things like going toe-to-toe with the media, and grassroots conservative appreciate that.”

“I think they are looking for that next step and that next generation,” he added.

Meridith McGraw contributed to this story.