Special election ignites battle over who is ‘welcome’ in Black caucus

‘Succession’ Fight: Can Logan Roy Save His $18 Billion Fortune?

Marcellus Wiley: A statement win washes away some of our memories of Baker Mayfield coming up short I SPEAK FOR YOURSELF

Special election ignites battle over who is ‘welcome’ in Black caucus 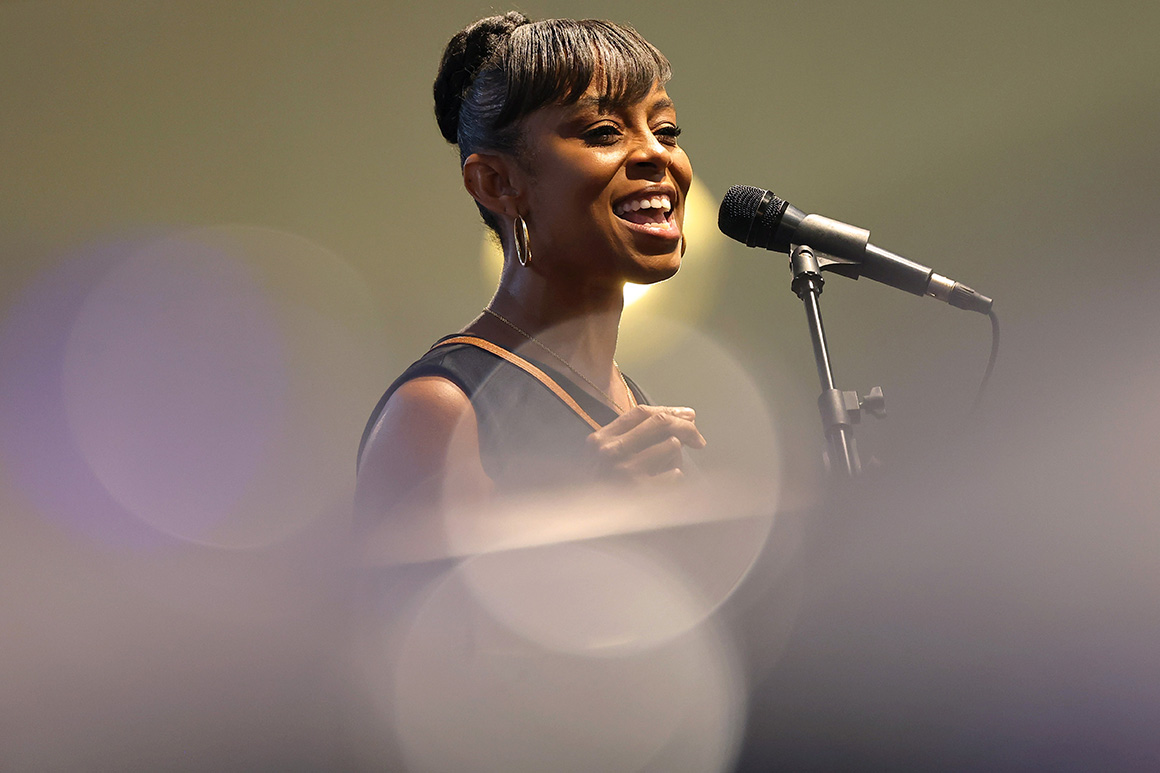 The winner of a special House election in northeast Ohio is almost certain to be one of two Black women. But the Congressional Black Caucus is intervening with an unusual goal: playing favorites between them.

Shontel Brown — the chosen candidate of the caucus — would honor “the rich history” of the group, not be someone who fights against it while “trying to make a name for themselves,” CBC Chairwoman Joyce Beatty (D-Ohio) said while campaigning in the district Saturday with other top Black lawmakers. Brown wouldn’t be “a single solitary know-it-all,” said Rep. Bennie Thompson (D-Miss.). She wouldn’t “come in and try to break up that unity,” Rep. Gregory Meeks (D-N.Y.) added. She demonstrates “basic, good respect,” House Majority Whip Jim Clyburn (D-S.C.) concluded.

Left unsaid but implied with all the subtlety of a fire alarm: Nina Turner, Brown’s opponent in Tuesday’s Democratic primary, would be her opposite.

Turner earned the ire of senior CBC members by, among other things, comparing voting for Joe Biden to eating a bowl of excrement and saying that Clyburn hasn’t gone far enough to cash in on his early endorsement of the president to get policy wins.

The CBC’s decision to wade so forcefully into the contest has reignited tensions and ideological fractures among Black Democrats. Veteran incumbents see their intervention as crucial to preserving the integrity of their storied caucus from Turner, an outspoken ally of Sen. Bernie Sanders (I-Vt.) who is prone to broadsides against fellow Democrats. But to Turner allies, the CBC is using its collective power to intimidate progressive candidates and is betraying its core mission of boosting Black representation. 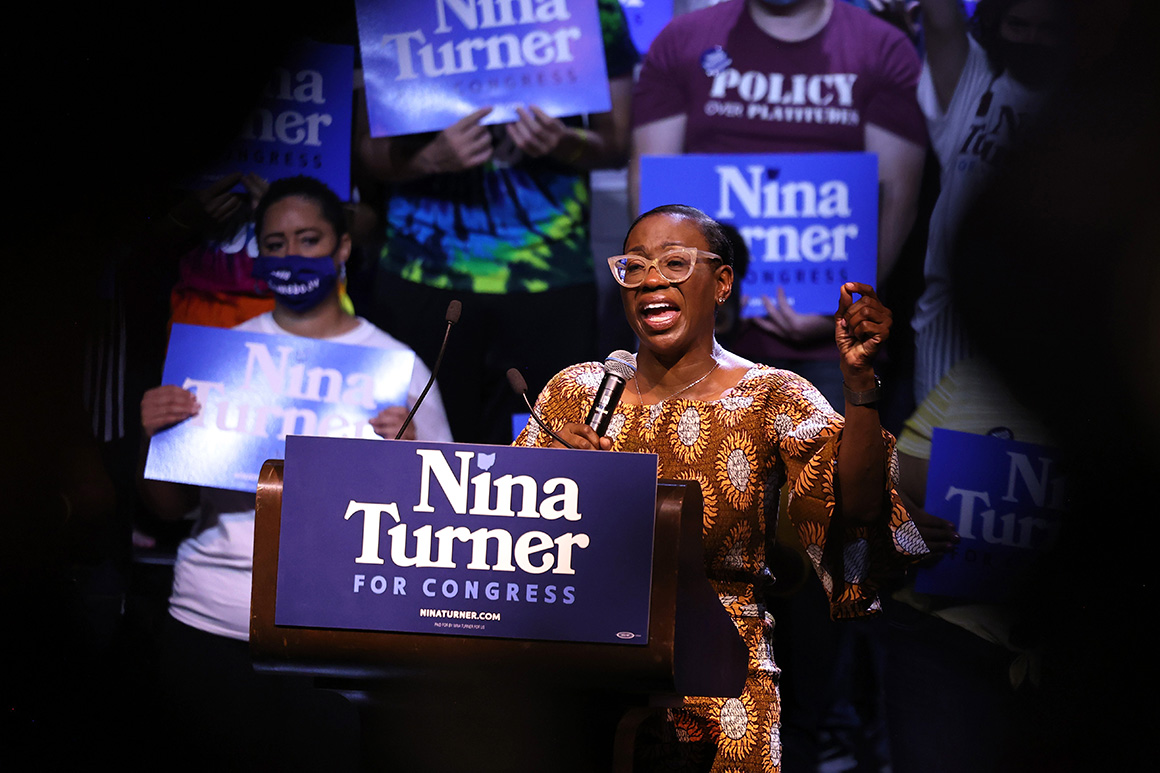 The outcome of the race will hint at which faction has the upper hand in the party ahead of more primary brawls to come next year, but it will also address a broader question: How the 50-year old Congressional Black Caucus, one of the oldest and most powerful groups in Congress, will evolve as a new class of Black lawmakers emerges — one that is more eager to enact sweeping liberal policies and less willing to defer to seniority.

“What messaging are we sending as a party?" said Kina Collins, a Black activist challenging a CBC member in Chicago. "I think that messaging is: You are not welcome. And if you are not who we are anointing for this position, then we will basically raise resources against you to silence you."

This Ohio primary has been deemed a bellwether for the direction of Democratic Party. And Turner, a face of the progressive movement, began with a huge head start in money and name recognition before the contest evolved into a toss-up with Brown.

Turner’s colorful language provoked some of the CBC, especially when she appeared to concur with a June assessment by the rapper Killer Mike that Clyburn had settled only for the creation of Juneteenth as a federal holiday, as opposed to more substantive policy, in return for his influential endorsement of Biden in 2020.

“The statements that Nina Turner made about the president of the United States and Jim Clyburn is unacceptable to me, and you can tell her I said that — in quotes,” Beatty said, while also referencing the now-infamous comment about voting for Biden and eating excrement. ("And she didn’t say crap," Beatty added.)

“I don’t think that’s conducive to our core values of respect,” Beatty said. Clyburn, she noted, is one of the most powerful Black men in the country. "And so, I’d send a message back to Nina Turner: Don’t speak for the Congressional Black Caucus or me.” 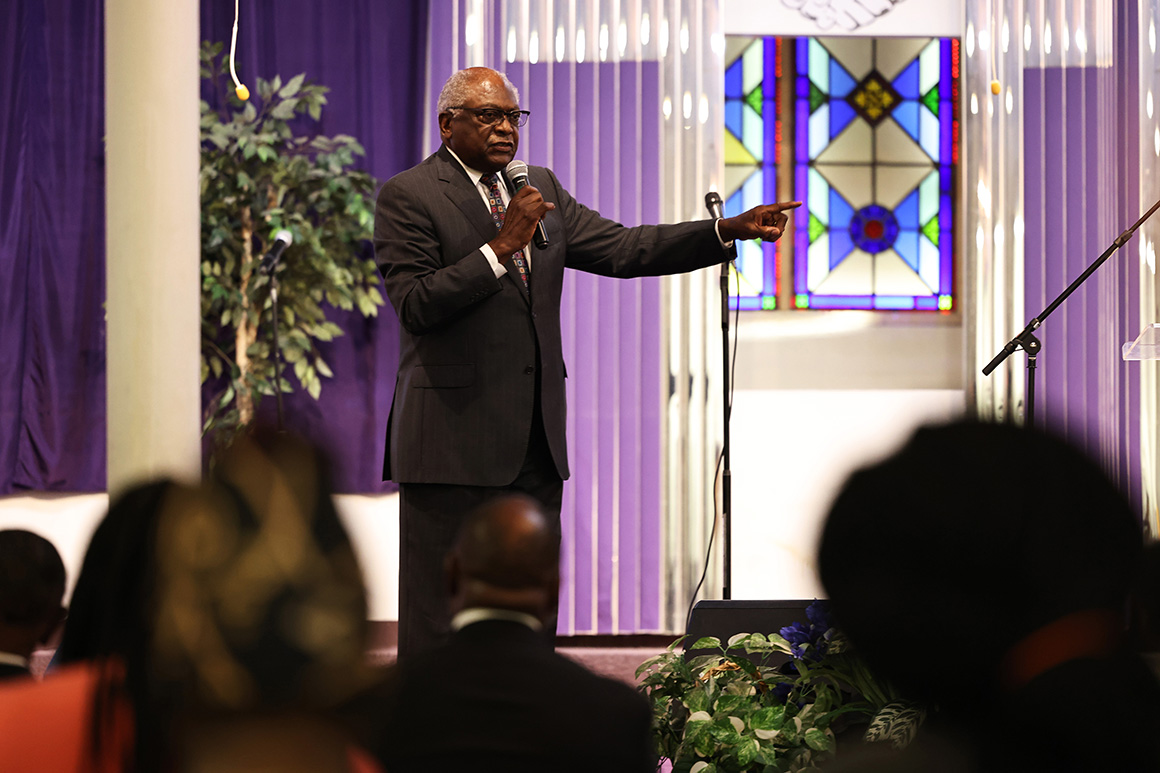 While Brown, the chair of the Cuyahoga County Democratic Party, has the backing of nearly every senior member of the CBC, Turner has been endorsed by the biggest progressive names in Washington, including Sanders and Rep. Alexandria Ocasio-Cortez (D-N.Y.). In a perfect split screen, the CBC leaders stumped in the district the same weekend that Sanders appeared for Turner.

"My record in public life is one that is singularly focused on the issues, and more importantly, the people the Caucus was created to serve," Turner said of the CBC’s involvement in the race. "However, people are free to jump in and endorse anyone they want. I don’t begrudge them for that. This is not a monarchy. I don’t own any seat that I’ve ever had."

In some ways, this primary is another iteration of a feud between liberal insurgents and longtime Black lawmakers that has been brewing for years. It grew particularly contentious in 2020 when Justice Democrats, a progressive group known for targeting incumbents, backed challengers to Beatty and Rep. Lacy Clay, a son of a founding member of the CBC.

Beatty survived her primary. Clay did not, and he was replaced in Congress by now-Rep. Cori Bush (D-Mo.), a Black activist and nurse.

To longtime CBC members, these insurgent candidates — Turner included — are unfairly questioning the liberal bona fides of Black party elders who spent decades earning their way to the upper echelons of government.

“The CBC is very liberal," said Rep. Emanuel Cleaver (D-Mo.). "It was liberal when it was founded. This isn’t liberals versus moderates. It’s something else."

“We’re pragmatists, that’s how I’ll say it," he added.

It’s true that many longtime CBC members have progressive credentials and back some of their trademark policy proposals, such as Medicare for All and the Green New Deal. But some, including Clyburn, have expressed disdain for the "sloganeering" of the left and warned of rhetoric that doesn’t produce results. 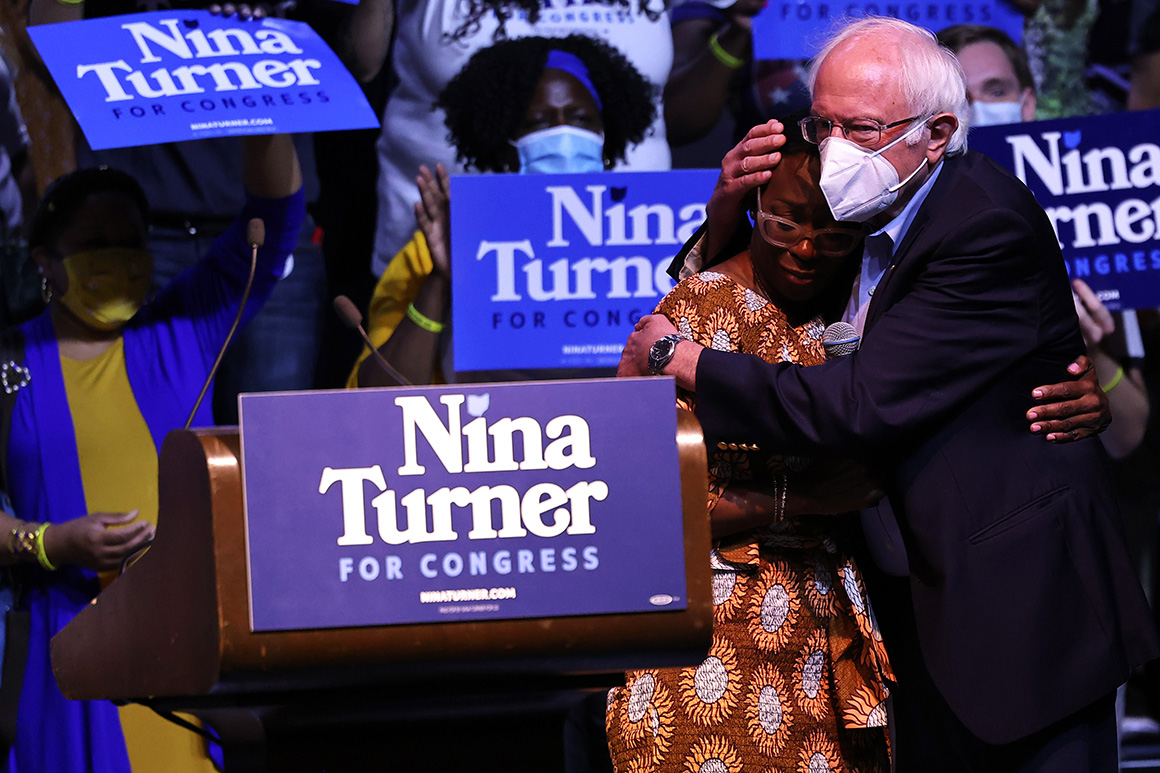 The left, in turn, has grown impatient with what its members describe as the slow progress of status quo leadership. Some have long been critical of the CBC for its ties to corporate donors and incremental movement on key issues like police reform. Turner’s supporters have painted Brown as propped up by special interests, including pro-Israel donors and lobbyists for fossil fuels.

“There have to be more people walking into these seats in Congress who have been boots to the ground, continuing to do the work and that have the same progressive values to fight against racism head-on, to fight for the things we want to see," said Bush, who got her start in politics after the Ferguson protests. "We owe that to this country.”

Longtime lawmakers have also recoiled at the idea of newcomers who fail to acknowledge those who came before them. In speeches last weekend in Ohio, CBC members noted that Brown had asked them for advice before running and that she was a star pupil at a candidate boot camp put on by the CBC Institute.

Brown is also a protégé of the former incumbent, Marcia Fudge, who vacated the seat to join Biden’s Cabinet. And she often pays tribute to the old guard.

“I like to think I’m best prepared and best positioned to carry on the legacy of those that have come before me," she said at a July campaign stop. In her stump speech, Brown vows to have the "courage" of Lou Stokes, a founding member of the Black caucus who represented northeast Ohio for 30 years; the "magnetic personality and an infectious smile" of his successor, Stephanie Tubbs Jones, and the "character and compassion" of Fudge.

Fudge has stayed out of the race formally, citing a need to be neutral while serving in the Biden administration. But she made her preference known when her mother cut an ad for Brown.

But Brown’s reliance on the district’s history has only added fodder to progressive fears that the caucus is operating like a dynasty.

The July endorsement of Brown by the CBC’s political arm — a nod of approval from the group itself, not just individual members — alarmed some Black progressives.

"I’ll put it this way: That decision made Barbara Jordan and Ron Dellums roll over in their graves. Louis Stokes, too," Ben Jealous, a Turner ally and former NAACP president, said, referencing CBC founders and former chairs. "It was shameful."

Regardless of who wins on Tuesday, the debate over the direction of the caucus won’t fade. The group has already stretched to incorporate new Black progressives, including Rep. Jamaal Bowman (D-N.Y.) and Ayanna Pressley (D-Mass.), who ousted white incumbents endorsed by CBC’s PAC. They and other younger liberals in the caucus are supporting Turner, a sign that Black politics are not monolithic.

In interviews, some of those newly installed members said they felt respected in the caucus even if their style and ideology varies from older members.

“You’ve already got progressive firebrands in the CBC like myself and Ayanna,” said Rep. Mondaire Jones (D-N.Y.), a liberal member who won an open seat in 2020. He is also backing Turner: “We need her in Congress urgently, regardless of which caucus within the Democratic conference she joins.”

But that leftward shift has caused mounting anxiety within a caucus that prides itself on consensus and speaking from a united bully pulpit — something that’s become especially important with such a narrow Democratic majority. Addressing voters last weekend, Clyburn alluded to the fact that he would not have to worry about Brown bucking the party line while conducting a whip count.

A Turner victory would no doubt embolden other progressive Black challengers to take on CBC incumbents. In Illinois, Collins is already running against Democratic Rep. Danny Davis. Others may become more vulnerable in redistricting. That’s made incumbent protection, and the institutional knowledge that comes with it, paramount to the CBC in 2022.

“Not to say we don’t need fresh energy — we do,” said Quentin James, the president of the Collective PAC, which supports Black candidates. “But there’s a rhythm to Black politics that you gotta kind of understand the beat to.”