‘Succession’ Fight: Can Logan Roy Save His $18 Billion Fortune?

Marcellus Wiley: A statement win washes away some of our memories of Baker Mayfield coming up short I SPEAK FOR YOURSELF 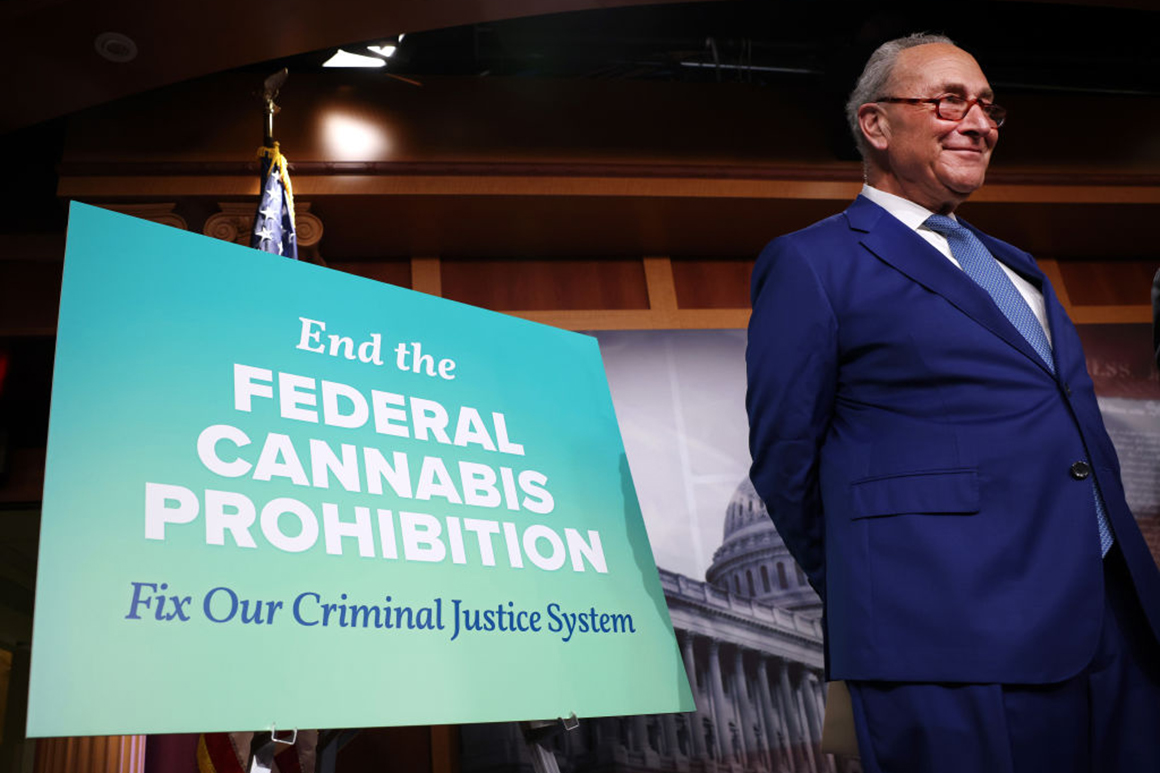 Two in three Americans live in a state that has approved the sale of recreational weed. What has evolved in the policy gap with federal law over the past decade is a patchwork of state-sanctioned fiefdoms where cannabis markets have largely developed locally and extend just to the border.

But the prospect of lifting all federal prohibitions has some business owners, regulators and lawmakers afraid doing so too quickly will invite industry behemoths to eat up small companies and push minority-owned firms out altogether.

“It’s going to open up a tidal wave of large operators … sucking up all the capital in the capital markets and essentially rendering social equity participants unable to even get funded,” said Aaron Goines, co-owner of Emerald Turtle, a social equity-owned cannabis delivery company in Massachusetts. “In general for social equity, I think it would be a disaster at this point for federal legalization to occur.”

Senate Majority Leader Chuck Schumer has thrown his weight behind cannabis decriminalization, producing a draft bill this summer that would regulate a nationwide industry and force siloed state markets to interact with each other. Tearing down those walls would open up new business opportunities and unlock more traditional banking tools for an industry that has long been forced to primarily use cash. However, it could immediately expose every existing state market to a frenzy of national competitors and disrupt hard-fought local policies, a combination of fears that have started to muddle the industry’s approach to federal legalization.

Struggling cannabis farmers in Oregon could suddenly ship their products anywhere in the country — including places such as Alaska and Massachusetts, where they would likely undercut the prices local growers typically fetch. The tightly controlled and expensive medical marijuana programs in Florida and Pennsylvania could be forced to compete with cheaper out-of-state products. And major national companies could pour into Washington state and Maine and buy up or push out small businesses.

Many states are trying to put guardrails up around their marijuana markets: Maine and Washington are intentionally limiting the industry to help protect small businesses. Others have created licensing requirements that intentionally help communities hurt by the war on drugs, including Massachusetts, which exclusively awarded cannabis delivery licenses to equity applicants in the state for three years.

“If you look at the states, it’s really clear that it’s always the smallest businesses and the most marginalized groups that suffer the most when you introduce this kind of chaos,” said former Massachusetts cannabis commissioner Shaleen Title, who now heads up the Parabola Center, a cannabis policy think tank.

Cannabis is the only industry in America’s history that has been legalized in 37 states (for recreational or medical use) without having permission from the federal government to operate.

And since interstate commerce is overseen by the feds, each market has developed to sustain every aspect of growth, production, distribution and sale because goods can’t cross state lines. Cannabis is being cultivated in states where it does not naturally grow well or cheaply, rather than importing it from places where it flourishes, such as California and Oregon.

It would be as if every state had to grow and process their own oranges because they couldn’t ship juice in from Florida.

The big question for small businesses in these siloed markets is what happens when those hard borders suddenly disappear.

“If the [Schumer] bill is passed, with that current language there that really doesn’t give the states the authority they need to keep their markets intact, then I think we see a race to the bottom,” said Jeremy Unruh, vice president of regulatory and public affairs at PharmaCann, a multistate operator with facilities in New York, Illinois, Ohio and Massachusetts.

Unruh believes large-scale cultivators will flock to states with cheap energy, looser labor and environmental standards, lower taxes and fees, and good outdoor growing conditions. Then they will export their cheap, mass-produced cannabis to the rest of the country.

“You will see a dramatic shift of the economic opportunities that states like Colorado and Washington have enjoyed … to places like Mississippi and Georgia and New Mexico that have lower labor standards, lower environmental standards,” Unruh said.

And for dispensary owners, producers and delivery companies, the removal of state borders will also immediately change where capital is coming from and who it goes to. Some states have residency requirements for funding, licensing or both — meaning that out of state capital is completely outlawed or must be invested in locally owned businesses. Others have limited licenses only to equity applicants, intending to open opportunities in the marijuana industry to those who faced disproportionate criminal enforcement around the drug.

“Some people are wanting to keep [the state’s industry] small, organic, mom and pop businesses. Which is nice, but it’s not reality,” said Eisenberg. “When we do open up, there won’t be any big players here. It’ll be big players from other places — like, God forbid, Portland — coming in and just buying us up.”

But laws like these could be deemed as limiting or burdensome to interstate commerce under the dormant commerce clause — an implied constitutional prohibition on states enacting laws that discriminate against imported products.

“Once the dormant commerce clause is active, social equity programs are going to become vulnerable,” said Robert Mikos, a professor at Vanderbilt Law School. Mikos says courts could strike down portions of current state regulations — like residency requirements or labeling regulations — under the argument that they burden interstate commerce.

“That’s something that’s flown under the radar, because it’s not in the text of [Schumer’s cannabis bill] or any other federal proposal,” Mikos explained during a panel hosted by law firm Perkins Coie earlier this month.

Worry about federal legalization is not ubiquitous. Chris Fevry is the co-founder of Your Green Package, a majority minority-owned Massachusetts-based delivery service. He says he is more concerned about growers he knows in the industry than his own business.

“I think competition is definitely a good thing,” he said. “The downside is the smaller players will get crushed.”

In Oregon, where licenses are abundant and there are hundreds of operators of every size, growers are anxious for interstate trade to begin. The state amended its cannabis regulations two years ago to allow interstate commerce the second the federal government permits it.

And in other states like Florida, industry advocates point out, the licensing structure favors larger companies over small businesses. Small operators, equity licensees and consumers in those markets would likely benefit from a more open market.

“It would be a shame [that] in order to protect nascent social equity experiments in some states, [it would] come at the cost of would-be entrepreneurs and consumer access in other states,” said Justin Strekal, political director at the National Organization for the Reform of Marijuana Laws.

Some lawmakers, regulators and business owners want the federal government to write stronger protections for state market regulations into any bill that decriminalizes marijuana. In comments submitted earlier this month on Schumer’s cannabis bill, Colorado Gov. Jared Polis, a Democrat, called for the federal government to allow state markets to continue with the structures they have created in the vacuum caused by no federal oversight.

Some industry officials and advocates — such as Title and Unruh — are requesting immediate descheduling and expunging of records paired with a phased-in approach to interstate commerce.

Under such a plan, states such as Oregon and New York could potentially enter into an agreement where Oregon exports cannabis to New York. Or a state like Iowa could throw open the doors to any state that will allow its producers to export. But the borders will not be immediately dismantled, giving smaller businesses the time to adapt and survive.

Oregon’s desire to have open markets, however, could pose a hurdle to any restrictions on interstate commerce in federal legislation — in the form of powerful Senate Finance Chair Ron Wyden (D-Ore.), one of the architects of the Senate decriminalization proposal.

In the meantime, some states are proactively changing their regulations to make their cannabis industry more nationally competitive. Colorado, the oldest adult-use market, initially put regulations in place that made it harder to grow cannabis outdoors then indoors. But this past summer, Colorado lawmakers passed a new bill loosening some of the regulations on outdoor grows — and indicated that the impetus was to make Colorado’s market more competitive when federal legalization takes hold.

“There are winners and losers in capitalism. And it is not our position to pick winners and losers,” said Strekal. “And by restricting interstate trade, you are picking the currently established players as the winners.”