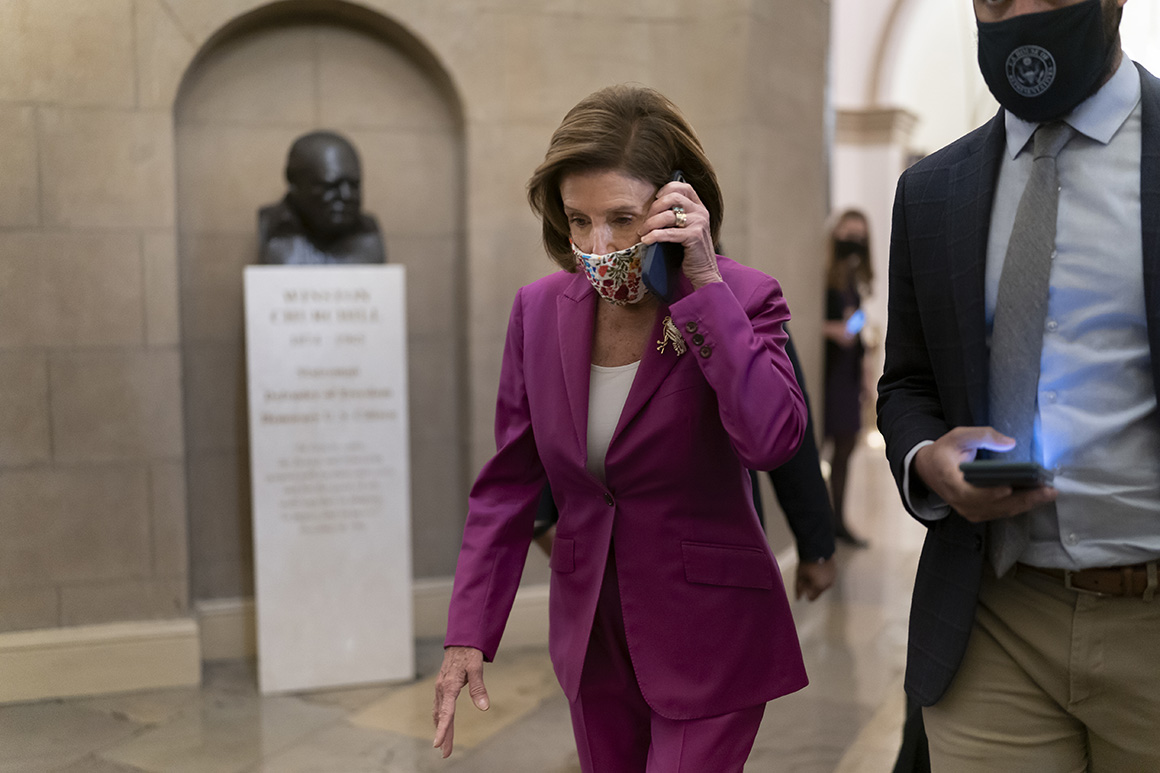 The third time was not, in fact, the charm.

After a multi-day whipping bonanza, Speaker Nancy Pelosi and her leadership team dramatically altered course on Friday to satisfy a handful of recalcitrant moderates who refused to back President Joe Biden’s $1.75 trillion social spending bill.

Instead, Democrats are set to again delay a vote on that party-line measure and turn their sights to just the $550 billion Senate-passed infrastructure bill — bending to the demands of their most vocal centrists in a last-ditch attempt to deliver at least one legislative win for Biden.

"Today we have an opportunity to proceed down a path to advance a very historic and transformative agenda," Pelosi told reporters late Friday afternoon.

Democrats do still plan to advance their broader $1.75 trillion climate and social safety net bill, set for passage without GOP votes, but it would only be a procedural move — some momentum, but not enough for many progressives. Congressional Progressive Caucus Chair Rep. Pramila Jayapal (D-Wash.) issued a firm statement on Friday afternoon rejecting the move to vote on infrastructure without the broader spending plan.

"If our six colleagues still want to wait" to vote on a party-line social spending bill in order to give time for a budget score, Jayapal said, "we would agree to give them that time — after which point we can vote on both bills together."

The dizzying maneuver, pushed by senior members of the Congressional Black Caucus, is a huge risk for Democratic leaders that reverses a promise to their left wing to move both of Biden’s priorities in tandem. While that move is certain to cost them at least a handful of liberal votes for the bipartisan infrastructure bill, senior Democrats believe they can make up most of those from the GOP side of the aisle.

Leaders are betting that they can muscle through the infrastructure bill Friday in a demonstration of progress while they wait for budget analysis insisted upon by their centrist members in order to take up the separate, party-line social spending bill.

“We’re going to move both bills forward because we need both of them,” said Rep. Joyce Beatty (D-Ohio), chair of the Congressional Black Caucus.

“We’re going to go and vote on the bipartisan infrastructure [bill], and we’re going to vote then" on the rule for debating for the social spending bill, Beatty added. “And then we’re going to continue to work together as an entire caucus.”

Pelosi and her team had hoped to win passage of both the infrastructure bill and the separate, more progressive proposal — delivering Biden a major victory after the party’s bruising Election Day showing earlier this week.

Instead, Democratic leaders had to partially abandon those plans Friday as a group of roughly a half-dozen moderates dug in and refused to relent on their demands for an official report from Congress’ nonpartisan scorekeeper, a process that is expected to take weeks. That prompted Democratic leaders to delay passage of the larger spending package and decide instead to only take up rules for an unspecified future debate on that bill.

As announced by Pelosi in a Friday afternoon letter to her caucus, that approach would clear the infrastructure bill, sending it to Biden’s desk. But no sooner did she do that than a panoply of progressives dug in and refused to go along, trapping Democratic leaders in a game of factional Whack-a-Mole.

“I’m a no,” said Rep. Rashida Tlaib (D-Mich.). When asked if she’d change her own stance against separating the two bills on the floor, Rep. Cori Bush (D-Mo.) replied “absolutely not.”

“I have consistently said that if the [infrastructure bill] comes to us as a standalone vote separated from the [social spending bill], I’m a hard no. Why anyone would think that has changed is beyond me,” said Rep. Jared Huffman (D-Calif.).

It remains unclear how many progressives ultimately back the infrastructure bill during a Friday night floor vote. Rep. Ro Khanna (D-Calif.) said that "I’m open to all possibilities and I’m open to giving the leadership a hearing." Rep. Raúl Grijalva (D-Ariz.) signaled he’d support the bipartisan plan, but only if both bills passed on the same day.

Pelosi herself predicted a "large number of members of the progressive caucus" who are prepared to vote yes on infrastructure Friday night.

Members on Pelosi’s left flank have insisted for months that the social spending bill move together with the infrastructure proposal, and liberal opposition, helped scuttle previous attempts to move the infrastructure bill forward over the last two months.

It’s unlikely enough Republicans would be able to make up the difference if the expected number of progressives defect during a planned floor vote on the infrastructure package. Past GOP whip counts had Republican yes votes hovering around 10 for the Senate-passed measure, though some have privately warned the numbers could change if Democrats kept delaying the vote.

Democrats are still in talks about exactly when they would vote on passage of the social spending bill, though leadership is indicating it intended to take that more progressive measure to the floor during the week of Nov. 15. Nonetheless, an official budgetary analysis on potential costs may not come until Thanksgiving week.

The decision to send the House into recess without holding a vote on the massive domestic policy bill for the third time since September is an embarrassment for Democratic leaders, including Biden, who on Friday urged recalcitrant members to vote in favor of his two domestic priorities. Until now, Biden had only broadly encouraged Democrats to support the two bills and had not firmly requested a vote at a specific time — a strategy that caused a host of issues for Democratic leaders in recent weeks.

Democrats entered the Capitol Friday morning prepared for what could have been among the biggest days in Biden’s entire first term. And Pelosi and her leadership team refused to give up easily, holding a procedural vote open on the floor for most of the day as she shuffled centrist holdouts in and out of her office Friday morning.

Later, Pelosi and her lieutenants hauled in senior members of the Congressional Black Caucus, including House Financial Services Chair Maxine Waters (D-Calif.) and Education and Labor Chair Bobby Scott (D-Va.) — many of whom are furious at their centrist colleagues’ persistent refusal to vote.

"I think there is a need for more information on the bill, but we think it’s important for us to show our support for what the president is bringing forward," Rep. Bennie Thompson (D-Miss.) said. "The best way to do it is to support the rule." The mobilizing of the CBC, one of the most powerful blocs in the Democratic caucus, could be key to unlocking progressive votes for the new strategy, according to senior party members.

Many in the caucus were baffled by the moderates’ resistance to pass the massive social spending bill. They argued it wasn’t the final version anyway, since the Senate was all but sure to make changes.

But for most centrist holdouts, that was exactly the problem: Democrats such as Reps. Stephanie Murphy (D-Fla.), Jared Golden (D-Maine) and Kurt Schrader (D-Ore.) have been beating the drum for weeks that they won’t vote for any legislation that can’t pass the Senate.

Doing so, they warned, would amount to a politically toxic vote on a sprawling bill packed with new spending and tax changes, only to see it be shredded by Senate centrists or be plucked from the bill by the chamber’s budget rulekeeper.

Nancy Vu contributed to this report.