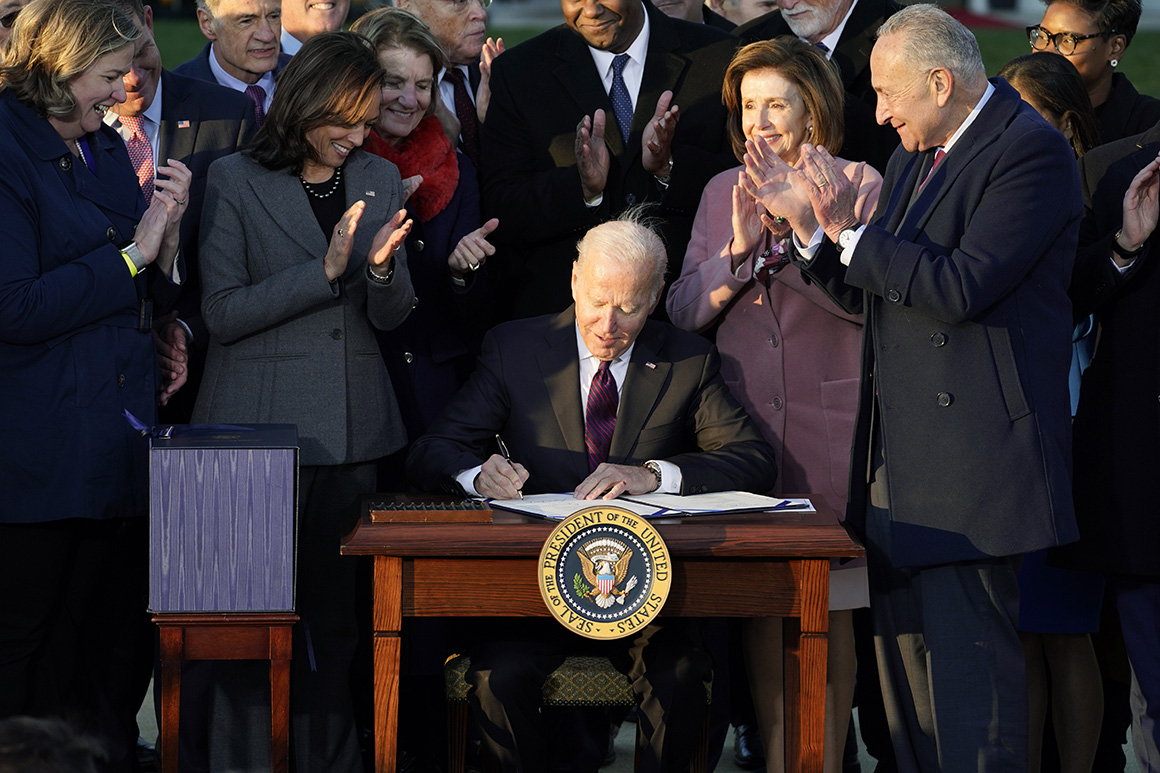 President Joe Biden did on Monday what his immediate predecessors couldn’t: sign a sweeping infrastructure bill into law and with a bipartisan crowd of lawmakers cheering him on as he did so.

The bill directs $550 billion in new spending toward roads, bridges, water pipelines, broadband and other major projects. It was championed by the White House as a generational investment in the country’s crumbling infrastructure. It’s also a feat that Biden predicted on the campaign trail he would accomplish, often to scoffs from opponents who argued it was naive to think he could find common ground with Republicans.

But on a brisk, windy fall afternoon — 299 days into his presidency — Biden secured a win that eluded former President Donald Trump, whose fruitless attempts at such a deal became fodder for punchlines among the political cognoscenti.

“Too often in Washington the reason we didn’t get things done is because we insisted on getting everything we want,” Biden said. “With this law, we focused on getting things done. I ran for president because the only way to move this country forward, in my view, was to compromise and consensus. That’s how the system works. That’s American democracy.”

The signing of the bill comes at a precarious time for Biden, coinciding with a sputtering of his approval rating that has created a mortal threat to his party’s hold on its slim majorities in Washington.

It has led to questions about whether the president will get a moment like Monday again. But the White House was eager to turn the script, with officials again encouraging comparisons to Franklin D. Roosevelt’s New Deal.

“To paraphrase one of my favorite former vice presidents: It’s a big effin’ deal,” said Senate Majority Leader Chuck Schumer (D-N.Y.), referring to Biden’s comment to President Barack Obama at the signing of the Affordable Care Act in 2010.

Officials also touted that the bill would ensure the U.S. invests more in infrastructure next year than China — after months of holding up his legislative priorities as a test of whether democracies can compete with autocracies. Biden’s signing came hours before he planned to meet virtually with Chinese President Xi Jinping.

“The world has changed. And we have to be ready,” Biden said at the White House ceremony on the South Lawn. “My fellow Americans, today I want you to know, we hear you, and we see you. The bill I’m about to sign into law is proof that despite the cynics, Democrats and Republicans can come together and deliver results.”

About 800 people attended the bill signing, a crowd that included current and former members of Congress, current governors and other local elected officials, and representatives from labor and business groups, among others. The size of the affair gave it the feel of a homecoming celebration — though, unlike those campus events, this one featured members of the other team.

Sen. Rob Portman of Ohio, the lead Republican negotiator on the bill, was a featured speaker. He used his time to credit the bill as a major boon for shoring up roads, bridges, ports, broadband and more. He also offered considerable validation for Biden as he takes incoming from Republicans over more spending, describing the new spending as something that would help combat rising prices of goods across the country.

“That’s why economists say this bill is counter-inflationary, which is so important right now,” Portman said on Monday.

Biden’s aides say that the infrastructure bill, combined with a massive social spending package they are hoping for a vote on soon, will help create jobs and aid families struggling with high prices. And they plan on more explicitly selling the bills with upcoming stops beginning in New Hampshire, Michigan and Ohio.

Along with the Democratic and Republican federal, state and local government leaders who were in attendance at the White House, also spotted in the audience were former red-state Sens. Heidi Heitkamp of North Dakota, Joe Donnelly of Indiana, Max Baucus of Montana and Doug Jones of Alabama, as well as Obama’s former Transportation secretary Ray LaHood, a Republican.

“It shows that it can be done,” LaHood added, “and Biden was a leader on this.”

The ceremony capped off a winding journey for the legislation, which was crafted and passed by Congress on a bipartisan basis, after first being yoked to Democrats’ plan to enact a larger, social spending bill through the arcane budget reconciliation process.

That decision by leadership, and encouraged at times by Biden himself, led to the infrastructure bill languishing for months after it passed the Senate in August as Democrats negotiated parts of Biden’s signature Build Back Better agenda. The two were subsequently delinked after two trips by Biden to the Hill to huddle with House Democrats. The House ultimately passed the infrastructure bill on Nov. 5, just days after Democrats suffered a big defeat in the Virginia governor’s race.

“This is what it looks like when elective leaders set aside differences, shut out the noise and focus on delivering results on the issues that matter most to everyday Americans,” said Sen. Kyrsten Sinema (D-Ariz.), the deal’s primary Democratic negotiator and one of the two key Senate holdouts in reconciliation negotiations.

But while LaHood and others said they viewed the negotiation over the infrastructure bill as a template for future cooperation between the two parties, Biden advisers and allies stress they are realistic about the chances of landing more big breakthroughs. Biden himself offered a tacit admission of the limits of bipartisanship in such a polarized environment when he nodded at Portman, calling the Republican senator “a hell of a good guy,’’ before adding, “I know I’m not hurting you, Rob, because you’re not running again.”

Though 32 Republicans voted for the bill across the House and Senate, most Democrats are pessimistic about passing future bills with GOP support. That is owed, in part, to the backlash that those Republicans received from Trump and other conservatives for their votes. In some cases, threats of violence were made against the 13 House Republicans who voted in favor of the legislation, ensuring its passage despite a half-dozen Democratic defections.

The only other bill that has gained Republican support in the Senate this year is one that funds semiconductor production in an effort to combat China’s growing industrial strength. Other than that, Biden is staring at a GOP blockade for all of Democrats’ other major priorities, from voting rights to immigration and police reform.

Rep. John Yarmuth (D-Ky.) said the impact of the infrastructure bill would make a “huge difference” in his home state of Kentucky as some $5 billion is set to be directed toward projects in the state. But Yarmuth offered a blunt assessment of future work with Republicans.