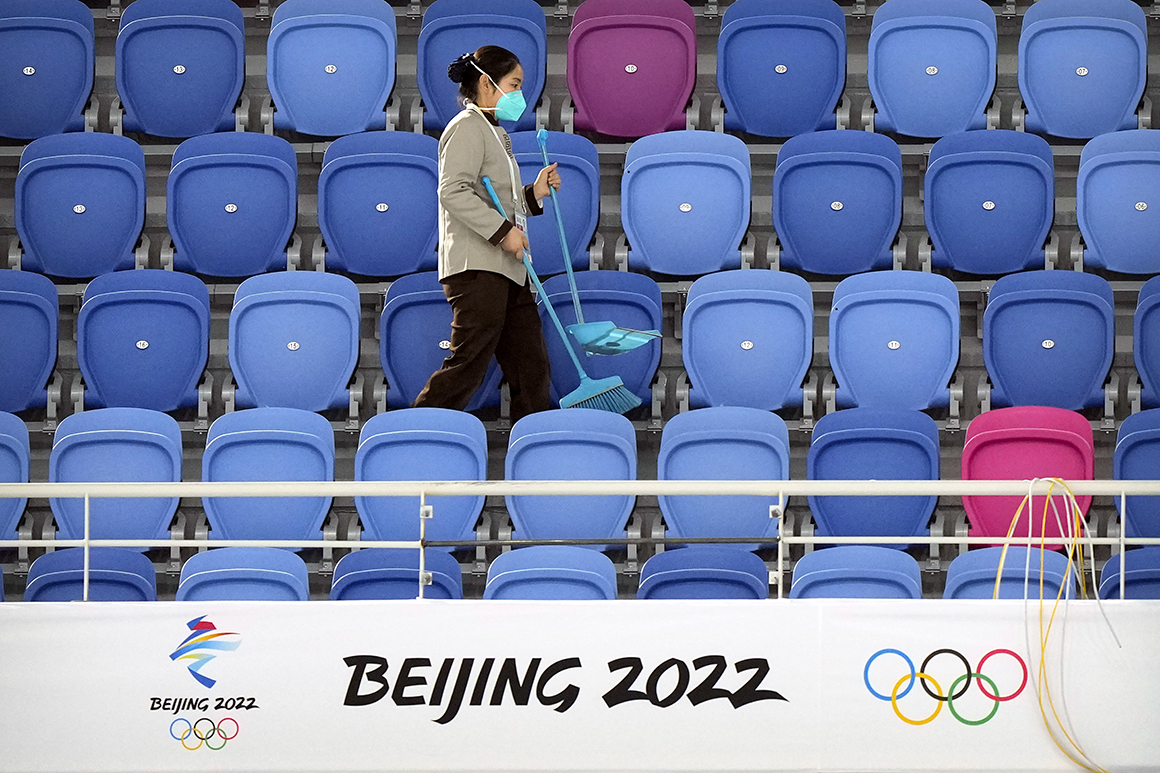 As President Joe Biden weighs whether to impose a diplomatic boycott on next year’s Winter Olympics in China, Democrats and Republicans on Capitol Hill want to force his hand.

Biden is facing bipartisan pressure from Congress to snub China at the 2022 games as some senators seek to force a diplomatic boycott as part of annual defense policy legislation hitting the Senate floor this week. The goal, lawmakers say, is to call attention to China’s human rights record, including what the Biden administration has characterized as a genocide of religious minorities in Xinjiang.

But House and Senate leaders are cool to the idea of imposing a diplomatic boycott on the games as part of the defense policy bill — even as support is growing on both sides of the aisle to send a message to Beijing.

“I think it’s a very difficult issue, and it would be tough to get it done in that way,” House Armed Services Chair Adam Smith (D-Wash.) said in a brief interview. “As a general rule, I don’t think boycotting the Olympics is a good approach.”

“I don’t think we’ll get it done,” added Senate Foreign Relations Chair Bob Menendez (D-N.J.), who supports a diplomatic boycott. His GOP counterpart on the panel, Sen. Jim Risch of Idaho, offered a similar assessment: “I don’t think there’s a consensus one way or the other at this point.”

Biden is expected to heed a recommendation from his advisers to bar U.S. government-sponsored travel to China for the Olympics, according to a Washington Post report Tuesday. The Biden administration has declined to comment on that report.

“If the president does it, then it obviates the need for legislation,” Senate Armed Services Chair Jack Reed (D-R.I.) said. “But it could be something that comes up.”

Lawmakers are already crunched for time on the National Defense Authorization Act, the annual defense policy bill that has cleared both chambers with bipartisan majorities for 60 years in a row. And with several significant issues still unresolved, top lawmakers aren’t keen on using the defense bill to make a bold statement on the Olympics — despite the widespread support.

The Senate is set to kick off debate this week on the NDAA, which outlines military policy and greenlights a $25 billion boost to Biden’s Pentagon budget request, including more money to counter China. But the debate, which will likely extend past Thanksgiving, is already months late and negotiators will have just a few weeks to hammer out compromise legislation, which will make thorny proposals, such as an Olympic boycott, a tough sell.

That dynamic likely leaves a final decision on the Olympics to the Biden administration, rather than Congress — though lawmakers say it would strengthen his hand if he had explicit congressional backing. Announcing a diplomatic boycott could help Biden mollify domestic critics who say the president has struggled to make progress on key issues in the complicated U.S.-China relationship.

Biden met virtually with his Chinese counterpart Xi Jinping on Monday evening, but a senior administration official said the Olympics did not come up during the hourslong discussion. (Previous reports indicated that Xi was prepared to formally invite Biden to attend the games.)

The idea of a diplomatic boycott has broad support in Congress, from Republican China hawks to liberals such as Speaker Nancy Pelosi.

In the upper chamber, a group of ideologically diverse senators introduced an amendment to the defense bill that would impose such a boycott by denying funding for U.S. officials to attend the games. The amendment is spearheaded by GOP Sens. Mitt Romney and Todd Young and Democratic Sens. Tim Kaine and Ed Markey. Their amendment, however, allows the secretary of State to waive the ban if he determines doing so “is in the national interest.”

Curtailing official U.S. involvement in the Olympics is one of a range of proposals Democrats and Republicans are weighing to punish and confront Beijing over its human rights abuses, military modernization and the possibility of an invasion of Taiwan.

But some lawmakers questioned the effectiveness of such a proposal.

“I think we’re going to have to be pretty nimble in our approach to a worsening human rights situation in China,” Sen. Chris Murphy (D-Conn.) said. “I’m certainly open to a diplomatic boycott. I’m not sure how impactful that would be. They don’t really want our diplomats, they want our athletes.”

A full boycott of the Olympics, though, has never gained much traction on Capitol Hill, as lawmakers are wary of denying American athletes the opportunity to compete in events they spend years training for. Romney, who ran the 2002 Winter Olympics in Salt Lake City, supports a diplomatic boycott and said anything more would “put a huge burden on” the athletes, who “should be able to compete on the time frame and on the field of play they had expected.”

"I think athletes should compete,” Romney told reporters. “I’d like to see the United States national anthem played in Beijing.” 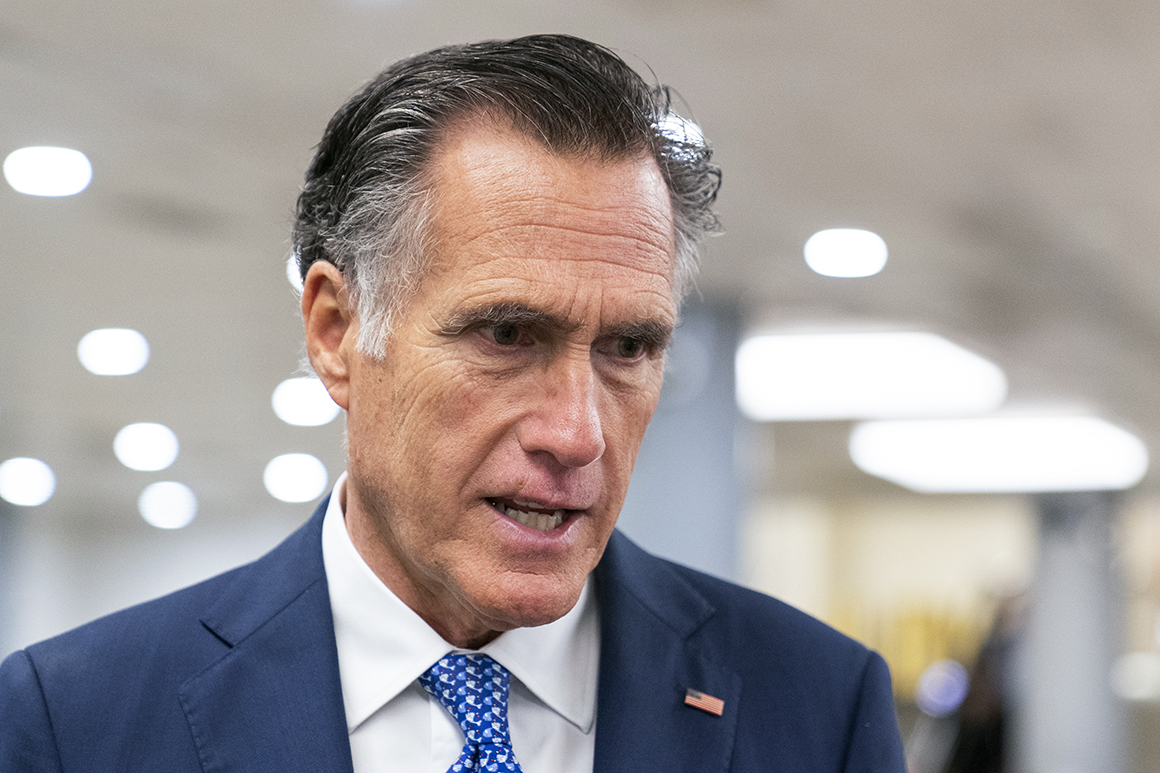 The U.S. has long struggled to make progress with Beijing on its treatment of Uyghur Muslims in the Xinjiang region — which the Biden administration has called a genocide — as well as its encroachments in Hong Kong and Tibet.

“Perceptions are very important to the Chinese Communist Party,” Young said. “They’ve tried to create the misperception that they’re a responsible global actor. … I think if you bring it to the floor, it would be a tough vote to oppose.”

Washington has mostly resorted to economic sanctions on those matters, with little to show for it. At the very least, a diplomatic boycott could deny Beijing a propaganda win.

Senate Majority Leader Chuck Schumer is also pushing to fold U.S.-China competitiveness legislation into the wider defense bill to help it clear a blockade in the House.

But a final defense bill may still send a shot across the bow at China on the winter games, even without a diplomatic boycott.

Competing legislation that passed the House in September includes a provision barring defense funding for travel by U.S. officials to attend the Beijing Olympics or Paralympic Games. The measure, which was adopted by the House Armed Services Committee during its deliberations on the bill, was sponsored by Florida GOP Rep. Michael Waltz.

The U.S. and most other countries traditionally send a delegation of senior officials to attend the opening and closing ceremonies of the Olympics. They also provide a potential opportunity for diplomacy — or uncomfortable photo-ops.

At the 2018 Winter Games in Pyeongchang, South Korea, Vice President Mike Pence represented the U.S. and was seated directly in front of Kim Yo Jong, the sister of North Korean dictator Kim Jong Un, during the opening ceremony. The pair did not interact.