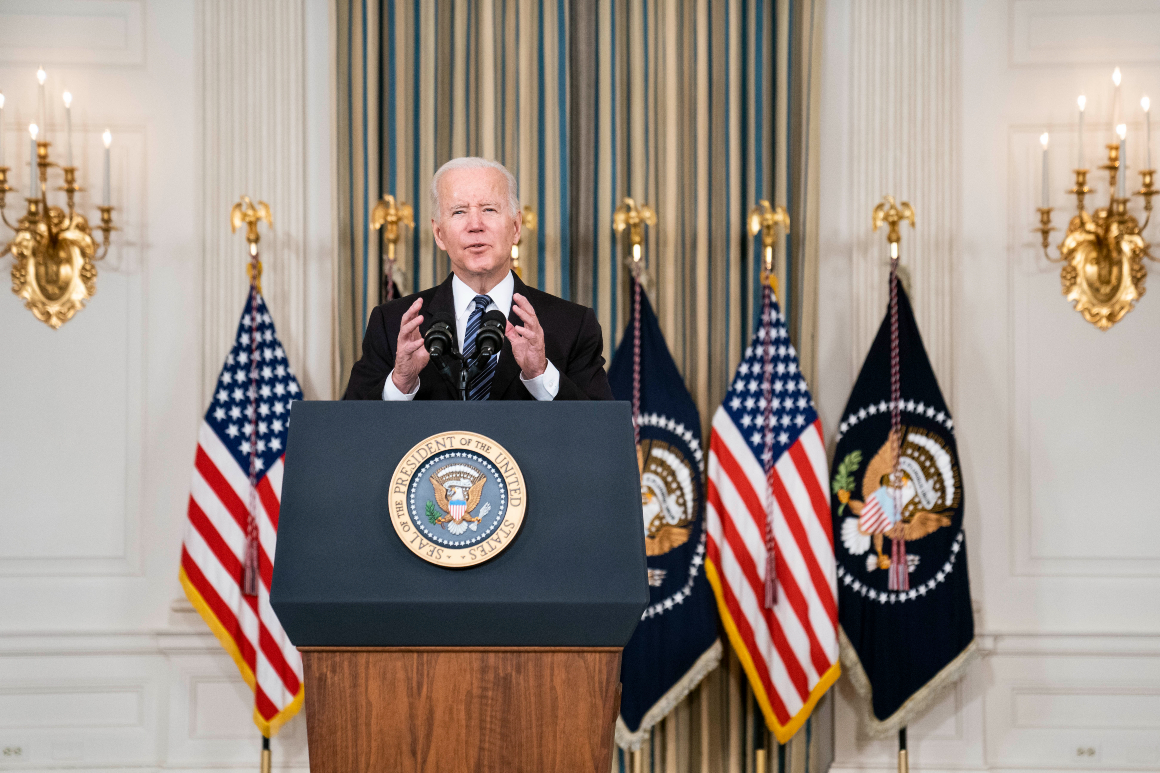 Don’t call it a comeback. Seriously, don’t. But for the White House, the breakthroughs they had last week represent major progress. And after the few months they’ve had, they’ll take it.

In the span of four days, the president signed his bipartisan infrastructure bill into law and saw the second piece of his landmark economic package pass through the House. The Food and Drug Administration authorized Covid-19 booster shots for all adults, and the administration announced a new purchase of 10 million treatment courses of the Pfizer antiviral Covid-19 pill. All this, while government reports show strong gains in the number of jobs across the labor market.

“This week was probably his best week since the spring,” said John Podesta, Bill Clinton’s former White House chief of staff. “Does that result in an instant bump in his numbers? I’m not so sure. That’ll take a while. He has to get back to what his core strength is — and I think you saw that this week — which is that he’s a guy who cares about working people and the middle class.”

Against the backdrop of rising consumer costs, an equally steady drip in approval ratings, and a growing number of House Democratic retirements, the past week was a small glimpse of what a presidency on track could resemble. And, inside the White House, officials said they felt optimistic heading into the Thanksgiving holiday and ready for the next month of intense legislative battles and deadlines. Democrats on and off the Hill, likewise, expressed a rare bit of glee about the string of successes.

“I’m chugging up I-95 going through Delaware,” said Rep. Bill Pascrell (D-N.J.). “And I had to stop today for sure at the Joe Biden Welcome center.”

Mike Donilon, the longtime senior adviser to the president, described the past week as “pivotal.” The signing ceremony of the bipartisan infrastructure bill — directing $550 billion in new funding to the country’s ailing infrastructure — beat back “skepticism that you could do something big with a bipartisan bill” he said. And he described the passage of the social policy bill through the House as a “giant step forward.”

“The President knew from the outset it was going to be difficult,” Donilon said. “A lot of what happened this week has been a product of a lot of work.”

At times, it didn’t seem as if that work would prove fruitful. The president took two trips to the Hill — nearly a month apart — that resulted in two failed attempts to corral enough Democratic support for his infrastructure bill. Most Democrats, including leadership, blamed the repeated stall-outs on Biden’s decision to not directly demand an immediate vote on the legislation.

But the White House counters that its persistence ultimately helped pave the way for passage. Since Sept. 1, administration officials have held nearly 700 calls and meetings with lawmakers or their senior staff on the infrastructure and social spending packages, according to a White House aide.

There were countless hours of Zoom meetings, phone calls, treks to the Hill and Oval Office meetings. The early outreach by Louisa Terrell, the head of the White House Office of Legislative Affairs, and National Economic Council Director Brian Deese, beginning months ago, was key to brokering an agreement with moderate House members that cleared the way for House passage of the social spending bill. Deese and Terrell were on the Hill the night before the vote underscoring the Treasury Department’s revenue estimates for the bill, which was a final step in unlocking the votes, according to a White House aide familiar with negotiations.

“You just have to really stay nimble,” Terrell said. “You have to recognize, like for some of these members, particularly some of our House members, they haven’t been legislators when they’ve also had the White House, and they’ve had a unified government. These are new muscles.”

The president, meanwhile, spoke repeatedly to Sen. Joe Manchin (D-W.Va.), one of the two main Senate Democratic holdouts on his social spending legislation. According to two people familiar with the negotiation, it was Biden’s personal appeal that convinced the West Virginia senator to come up from his $1.5 trillion price tag for the reconciliation bill to $1.75 trillion. Though Manchin’s support for every measure within the bill is still not guaranteed, West Wing aides believe he will eventually offer his support for the package.

In talks with his own team, Biden encouraged them to “stay focused” on the bill — occasionally mixing in some salty language to punctuate the exhortation — insisting it would aid Democrats in the midterms.

But one week of positive news does not clear away some dark clouds on the horizon. Though Biden’s $1.75 trillion social services bill — which would extend the child tax credit, expand health care coverage and combat climate change, among other provisions — cleared a major hurdle in the House, it faces an uncertain fate in the Senate. The nation may be awash in vaccines but Covid cases are on the rise, largely among the unvaccinated, and the holiday season and winter months could contribute to increased spread of the virus.

The persistently low polling numbers for Biden were brought on, most Democrats believe, by the rise of the Delta variant, a botched Afghanistan withdrawal, and intraparty wars over the substance of Biden’s agenda. The fear now is that they’ll be baked in among voters by rising inflation, which has resulted in high prices for gas and consumer goods.

The administration has taken steps to address those fears. Biden recently called on the Federal Trade Commission to investigate “evidence of anti-consumer behavior” by oil and gas companies as gas prices remain high, warning of potentially “illegal conduct.” And aides argue that the social spending package will help with everyday costs, particularly around child care.

“He fundamentally believes this is the best way to lower costs for families. … He fundamentally believes that this is how we’re going to put the country in a position to be competitive,” Donilon said. “Bottom line is we know where the numbers are. [But] he has seen tough polling numbers before. We saw them in the campaign and his view is the same: He comes to these things with a strong conviction about what is the way forward and he is very good about staying focused on what he believes is the job that has to get done.”

Already, Biden has been hitting the road to tout both bills. But there is a desire among Democrats for the White House to move even more aggressively should the social spending bill ultimately pass through Congress. In particular, they want the administration to target Republican governors and lawmakers who try to take credit for new projects in their state made possible by funding approved in either Biden’s Covid-relief plan from earlier this year or the recently signed infrastructure bill. They also want to see the president explain to voters that some of the benefits will take time to dole out.

“I’ve made this point to the administration … a lot of it’s going to depend on managing expectations” said Rep. John Yarmuth (D-Ky.), the retiring chair of the House Budget Committee, noting the lag-time in implementation of many of the programs that will be funded in the bill. “We have to get much more ruthless” with Republicans.

“I’ve been frustrated by the messaging from day one,” said Yarmuth, who pointed to Sen. Bernie Sanders’ (I-Vt.) public campaign for a $6 trillion social services package and acquiescence to a $3.5 trillion top line. “Once he said that, that became the story. And we’ve never been able to change the focus to what it actually does. And in fact, there’s so many things in that bill, that it’s kind of hard to explain what’s in there for the American people.”

But as Biden starts taking to the road to tout his recent accomplishments, he’ll still have to play some legislative tetris back in D.C. The deadline to fund the government is Dec. 3 and the nation could hit its debt limit by Dec. 15. And they still, of course, need to get the social spending package through the Senate — a hurdle that, Podesta said, will require “eyeball-to-eyeball” negotiations.

Though pleased with their wins this past week, those inside the White House aren’t pollyannaish about the road ahead.

“I’m not being naive about what we have to get done in December, it’s a lot,” Terrell said. “But my take on it from talking to [senators] is they are ready to go.”

Jonathan Lemire contributed to this report.