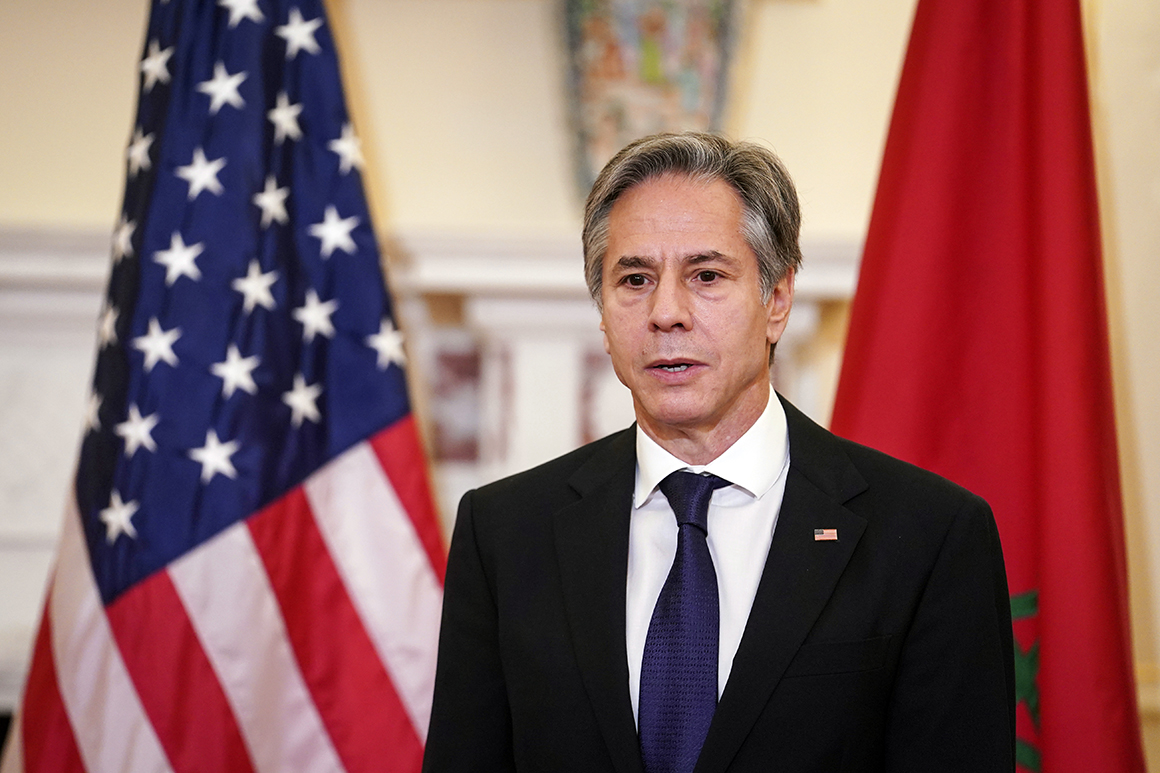 Christian groups, a U.S. government panel and former senior U.S. diplomats are furious over Secretary of State Antony Blinken’s decision to take Nigeria off a list of countries accused of engaging in or tolerating religious persecution.

Blinken’s decision was revealed last week just before he visited Nigeria, Africa’s most populous country and one where Muslim-Christian tensions have long flared.

State Department officials gave no reason for the move other than saying Blinken, upon the advice of various department sections, decided Nigeria didn’t meet the legal threshold to be named as “country of particular concern” in an annual religious freedom list released by the secretary of State. They denied the decision’s unveiling was linked to Blinken’s trip but couldn’t fully explain the timeline.

Critics, however, are calling Blinken’s move political, designed to appease an important African partner. One former diplomat called it the “revenge of the bureaucracy” at the State Department. Others questioned how it fits with the Biden administration’s claim that human rights lies at the center of its foreign policy.

The decision is likely to enhance worries among conservatives, including many evangelical Christians, that the Biden administration — unlike the Trump administration — will de-emphasize the plight of Christians persecuted overseas.

“It’s a victory for the terrorists — it’s a defeat for anyone concerned with human rights and religious freedom,” Frank Wolf, a former GOP congressman, said about Blinken’s decision. Wolf spearheaded some of the key legislation requiring administrations to name religious freedom violators; one of the laws is named after him.

The United States sees Nigeria as a key partner in the fight against terrorist groups such as Boko Haram and the Islamic State. Nigeria also is a major economic and political player on the African continent, which has suffered a string of coups and other instability in recent months.

But the issue of religious freedom in Nigeria is complicated. The country of 200 million is roughly evenly split between Christians and Muslims, and the tensions between the two communities are often multifaceted. They may include disputes over land and cattle grazing rights, for example, or tribal differences.

In recent years, however, the rise of Islamist terrorist organizations in Nigeria has meant religion is a greater factor, some activists say. Some also point to the use of courts that rely on Islamic law as a challenge. Many further stress that Muslims — especially moderate ones — also face growing threats in Nigeria.

It’s difficult to nail down exact statistics on religiously motivated violence facing Christians or other faith groups in Nigeria, but the number of Nigerians who have died directly or indirectly due to Islamist fueled conflict runs into the hundreds of thousands, according to the United Nations. And there are frequent reports of attacks on houses of worship, religious leaders and others.

The U.S. Commission on International Religious Freedom (USCIRF), a bipartisan panel, has since 2009 recommended that the State Department designate Nigeria as a “country of particular concern” on religious freedom. In 2020, Secretary of State Mike Pompeo finally did so, earning the panel’s praise.

A USCIRF report on Nigeria from earlier this year gave an array of examples of what appear to be faith-driven violence. Among them: the 2020 abduction and execution of Rev. Lawan Andimi by Boko Haram fighters.

In a news release last week, USCIRF said it was “appalled” and “especially displeased” at Blinken’s reversal on Nigeria. “We urge the State Department to reconsider its designations based on facts presented in its own reporting,” USCIRF Chair Nadine Maenza said in a statement.

The laws that govern the secretary of State’s decision say governments can be labeled as being of “particular concern” or be put on a “special watch list” if they “engaged in or tolerated” severe violations of religious freedom.

After “a good discussion within the department,” it was decided that Nigeria did not meet the criteria for any of the designations of concern, a State official said. The official declined to say which department divisions took what side in the internal discussions, but stressed that the ultimate conclusion didn’t mean that U.S. diplomats wouldn’t keep raising issues of human rights in Nigeria.

According to people familiar with the issue, the State Department officials who have long been resistant to listing Nigeria as a country of particular concern tend to be staffers in the Africa bureau.

Like other regional bureaus at the department, the Africa section’s top priority is not necessarily human rights — it’s maintaining and improving political relationships with other countries. It’s not unusual that the bureau might want to avoid injecting another factor into an already complex relationship with Nigeria.

Pompeo essentially overruled the department officials who fought the designation of Nigeria. He was supported by Sam Brownback, the former Kansas senator who served as the Trump administration’s special ambassador for international religious freedom.

Brownback said that he never argued that religion was the sole factor in much of the violence in Nigeria, but that it was foolish to pretend it was not a factor at all.

“I think what you’re seeing is the revenge of the bureaucracy,” Brownback said of Blinken’s decision to take Nigeria off the list.

Another former State official who dealt with religious freedom issues said it was strange that Blinken didn’t even put Nigeria on the lower-tier “special watch list.”

It was “diplomatic malpractice,” the former official said, speaking on condition of anonymity to be candid. The former official added: “You just gave leverage away. It was clearly tied to Blinken’s visit. The Nigerians clearly cared about it. Did we get anything out of it?” 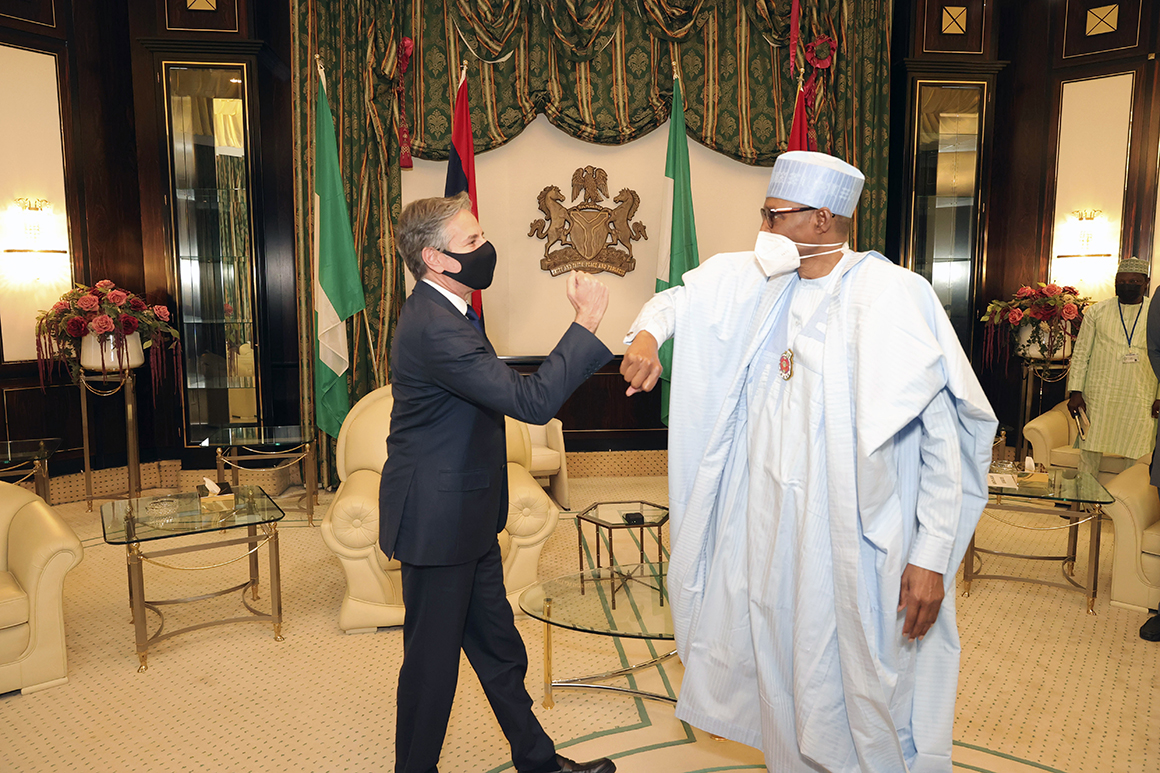 The State Department official said Blinken’s visit had nothing to do with the release of the secretary’s list of religious freedom violators. Rather, it was all about a deadline. Blinken was expected to release the list within six months of his unveiling of the department’s annual International Religious Freedom Report.

But the department often misses deadlines without repercussions. Plus, Blinken released the religious freedom report on May 12. That meant the department had already missed the six-month deadline when it unveiled his decision on which countries were of particular concern on Nov. 17.

“I understand that it’s hard to believe that it’s a coincidence,” the State Department official said of the trip’s timing.

In fact, when Blinken released the religious freedom report in May, he specifically mentioned religious liberty violations in Nigeria as well as a few other countries.

“In Nigeria, courts continue to convict people of blasphemy, sentencing them to long-term imprisonment or even death,” Blinken said during a press conference. “Yet the government has still not brought anyone to justice for the military’s massacre of hundreds of Shia Muslims in 2015.”

The State Department official dismissed questions about whether the Nigerian government had promised or offered anything in return for being removed from the list, saying the decision was purely a legal matter. The official said, however, that Nigerian officials are well aware of the many challenges facing their country, including from extremism and a growing population.

The Nigerian embassy in Washington did not reply to requests for comment. Nigerian President Muhammadu Buhari, a Muslim, has repeatedly pledged that his government will not tolerate religious or ethnic violence.

The effort was driven by evangelical Christians who supported Trump and who worry about persecution of Christians around the world — particularly in Muslim-majority countries.

Now, Christian activists are decrying Blinken’s de-listing of Nigeria. The move appears to validate their concerns that the Biden administration will de-emphasize the need to protect Christians abroad.

Some of the activists say Christians face a potential genocide in Nigeria. But they also note that members of other faiths, too, face danger from extremists there.

“Boko Haram has targeted both moderate Muslims and Christians,” said David Curry, president of Open Doors USA, a group that works to protect Christians worldwide. He said his organization was reaching out to U.S. lawmakers and hopes to convince Blinken to change his mind.

That appears to include ignoring another USCIRF recommendation and leaving India off the countries of particular concern list.

Biden and his aides see India as a crucial partner in the growing U.S. competition with China. As a result, they’ve said little publicly about growing religious violence against Muslims in India.

Blinken did, however, follow another USCIRF recommendation and add Russia to the list of countries of particular concern. The administration is at odds with Moscow over an array of issues.