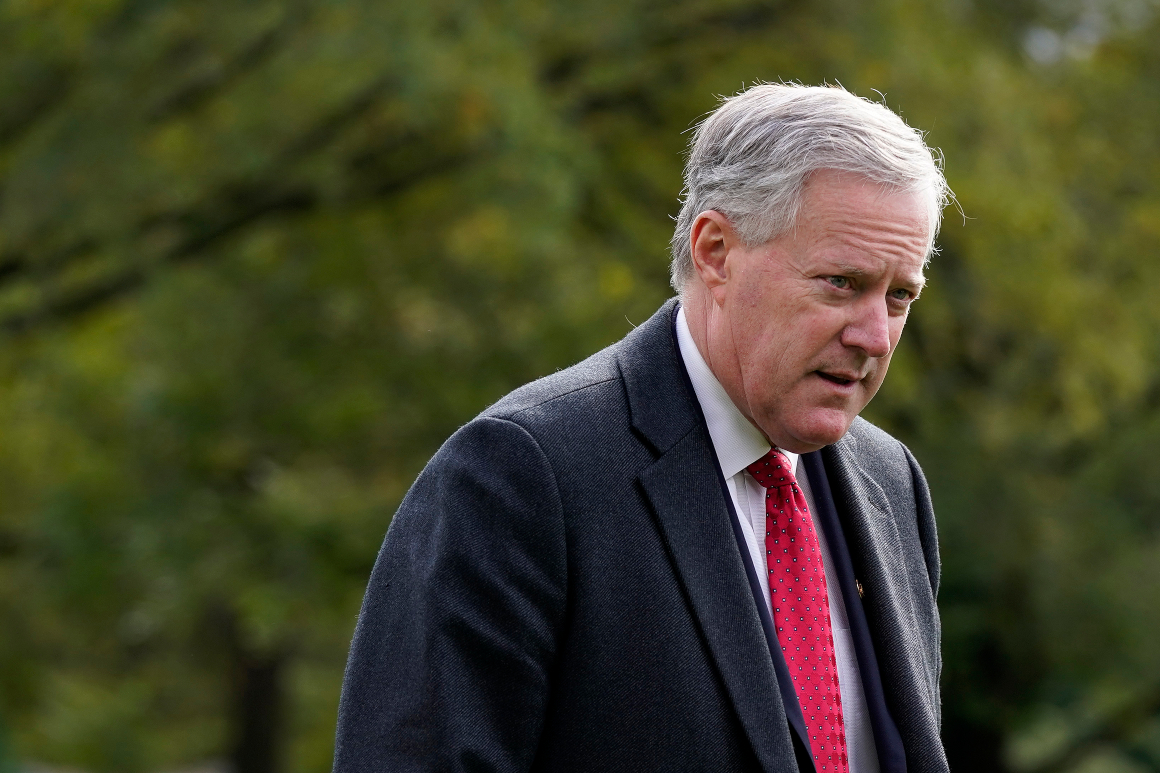 Mark Meadows indicated in a Jan. 5 email that the National Guard was on standby to “protect pro Trump people,” according to documents obtained by the House committee investigating the Capitol riot, which the panel described in a public filing Sunday night.

The context for the message is unclear, but it comes amid intense scrutiny of the Guard’s slow response to violence at the Capitol on Jan. 6 and conflicting timelines about their efforts from the Pentagon and National Guard leadership.

It’s unclear who Meadows, the former White House chief of staff to Donald Trump, relayed the information to or whether it was the result of any insight provided by the Defense Department. But the exchange is of high interest to congressional investigators probing whether Trump played a role in the three-hour delay between the Capitol Police’s urgent request for Guard support and their ultimate arrival at the Capitol, which had been overrun by pro-Trump rioters. The comment also aligns with testimony from former Defense Secretary Christopher Miller, who said that in a Jan. 3 conversation with Trump, the then-president told him to "do whatever was necessary to protect the demonstrators that were executing their constitutionally protected rights."

In other messages described by the committee, Meadows appears to have asked members of Congress to help connect Trump with state lawmakers shortly after his defeat in November.

“POTUS wants to chat with them,” Meadows said, according to documents obtained by the Jan. 6 committee and described publicly Sunday evening.

Meadows’ attorney did not immediately respond to a request for comment.

The messages are the clearest insight yet into the conversations Trump was having with senior advisers in the chaotic months after his defeat in which he sought to cling to power in increasingly desperate ways. Though Meadows turned over thousands of text messages and emails, he has declined to sit for a deposition to discuss those messages, claiming he is barred by executive privilege. The committee and Meadows had reached a tentative agreement for him to come in for an interview, but the pact collapsed last week.

Instead, the committee held a closed-door deposition without Meadows present and described the questions they would have asked him. The transcript of that closed session was appended to the panel’s contempt report, describing the details of the documents Meadows had provided.

“We would have asked him about text messages sent to and received from a Senator regarding the Vice President’s power to reject electors, including a text in which Mr. Meadows recounts a direct communication with President Trump who, according to Mr. Meadows in his text messages, quote, ‘thinks the legislators have the power, but the VP has power Too,’” the panel’s investigators noted.

Meadows’ comments on the National Guard’s readiness to defend Trump supporters align with concerns that have wracked investigators for months. POLITICO reported in May that a Capitol Police leader similarly encouraged officers to focus on anti-Trump forces within the Jan. 6 crowd, prompting concerns about intelligence failures even as the pro-Trump mob encroached on the Capitol.

The committee pointed out that many of the messages he shared already appeared to violate privilege by describing his own contacts with Trump. He also revealed many of those contacts in his recently released book.

The committee described a slew of other messages it obtained from Meadows including:

— Text messages with a “media personality” who had encouraged Trump to issue a statement asking those at the Capitol to “peacefully leave.”

— A text “sent to one of — by one of the President’s family members indicating that Mr. Meadows is, quote, ‘pushing hard,’ end quote, for a statement from President Trump to, quote, ‘condemn this shit.’”

— Texts to and from a member of Congress in November 2020 seeking contact information for the attorney general of Arizona to discuss claims of election fraud.

— Texts to and from organizers of the Jan. 6 rally that preceded the violent attack on the Capitol.

— Texts “reflecting Mr. Meadows’ skepticism about public statements regarding allegations of election fraud put forth by Sidney Powell and his skepticism about the veracity of claims of tampering with Dominion voting machines.”

Powell, who briefly worked with Trump’s campaign legal team before leading her own series of lawsuits intended to overturn the election results, was the most notable purveyor of outlandish claims of election fraud. She huddled with Trump at the White House in December 2020. Trump briefly considered naming her a "special counsel" to pursue election fraud.