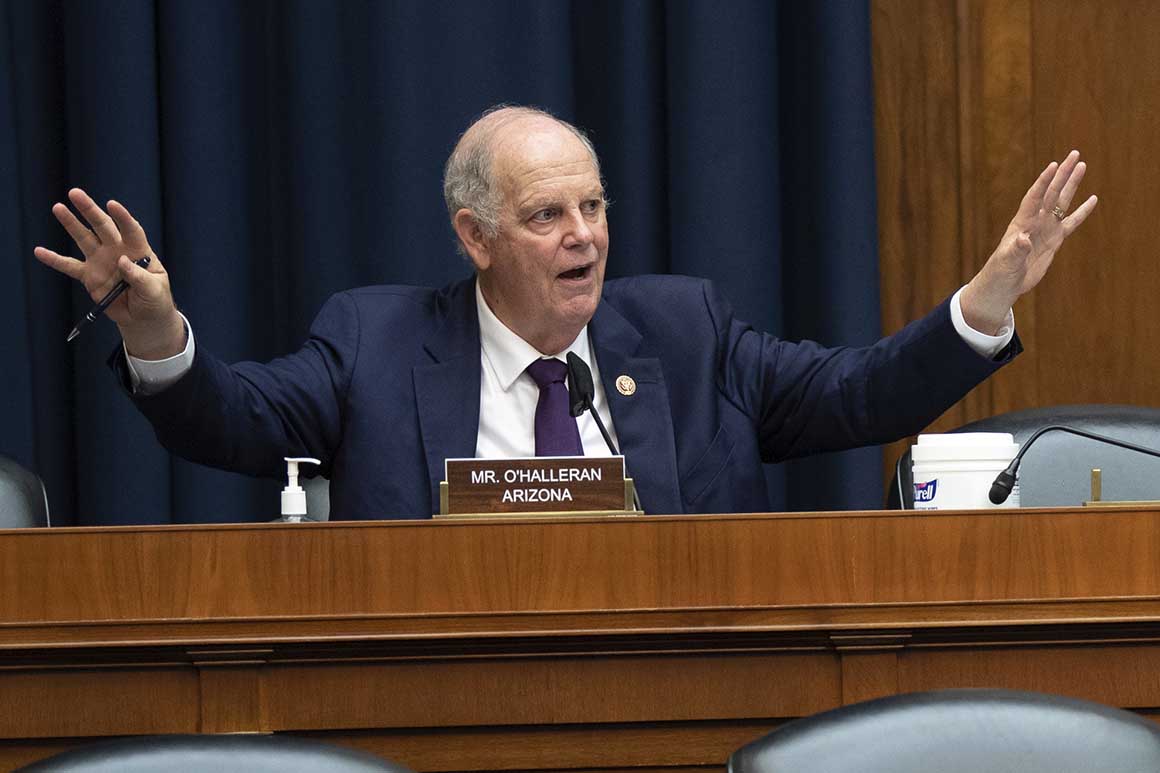 Arizona, one of the most bitterly divided swing states, finalized a new congressional map that could hand the GOP six of its nine congressional districts in 2022.

The state’s redistricting commission on Wednesday approved a layout that creates two true swing seats in the suburbs of Phoenix and Tucson — currently held by GOP Rep. David Schweikert and retiring Democratic Rep. Ann Kirkpatrick — while very possibly dooming Democratic Rep. Tom O’Halleran in the northeast half of the state.

Democrats, who currently control five of the state’s nine seats, are probably staring down a short-term loss in the current political climate. But the new map, drawn over several months by a bipartisan panel of commissioners and adopted unanimously, ensures the state will continue to be a top House battleground for the next decade.

Despite the unanimous vote, the two Democratic members claimed the final product favored the GOP and was not representative of a state that is trending blue.

The map contains five seats now-President Joe Biden would have carried in 2020 — but two of them would have backed him by the slimmest of margins, according to a POLITICO analysis. Meanwhile, O’Halleran’s district leans Republican, and Rep. Greg Stanton’s (D-Ariz.) leans Democratic, though either could perhaps become competitive in political environments that strongly favor one party.

Democrats spent much of the commission’s deliberations excoriating the independent chair for decisions she made that they felt favored Republicans. The National Democratic Redistricting Committee, led by former Attorney General Eric Holder, accused Erika Neuberg of being “derelict in her duties to the voters of Arizona” and “independent in name only.”

And the penultimate session was especially heated between the commissioners.

“We are in a state now that has five Democrats and four Republicans that have been elected to Congress,” Democratic commissioner Shereen Lerner said Tuesday. “There is no excuse for drawing a six to three map that favors either party as part of that.”

The partisan bickering ultimately resulted in changes that left the Schweikert and open Tucson seats more competitive. And the two Democratic commissioners, two Republicans commissioners and the chair all voted for it.

Those two seats are on track to host some of the most competitive races in the country next fall. Biden would have carried the new Tucson district by less than 1 point in 2020 (compared to his 11-point margin under the old lines).

The seat is open because Kirkpatrick is retiring in 2022. National Republicans are most excited about Juan Ciscomani, a former senior adviser to GOP Gov. Doug Ducey who raised over $600,000 last quarter.

Top Democratic candidates include state Sen. Kristen Engel and state Rep. Daniel Hernandez Jr., who was injured in 2011 during the Tucson shooting as an intern for then-Rep. Gabby Giffords (D-Ariz.).

In the Scottsdale swing-seat, Schweikert, a six-term Republican who has posted anemic fundraising amid an ongoing ethics scandal, finds himself in an even more competitive turf. Biden carries this redrawn version by a little less than 2 points (Trump carried it by 4 points before the redraw).

Democratic candidates include Jevin Hodge, a community leader, and Adam Metzendorf, a former executive for the Phoenix Suns, though more could enter the race.

The biggest unknown now is the fate of O’Halleran, a three-term Democratic moderate, who must decide whether to seek reelection in a district that became significantly more Republican, or retire. A Chicago police officer-turned Arizona state legislator, O’Halleran waffled from Republican to independent to Democrat before he was elected to Congress in 2016.

His path to reelection became much steeper during the commission’s deliberation process when Neuberg, the tie-breaking independent commissioner, decided against splitting Yavapai County — though the current map does divide the county between two districts. O’Halleran’s massive seat, which spans much of the northeast portion of the state and includes the Navajo and Hopi nations, will take in all of Yavapai, transforming it from a seat Biden won by 2 points to one Trump would have carried by 8 points.

That move also places Prescott, the hometown of embattled GOP Rep. Paul Gosar, in O’Halleran’s district, though he could also choose to run in the new 9th District along the state’s western border that more closely resembles his old seat and is more solidly Republican.

O’Halleran is no stranger to tough races and has fared well against baggage-laden opponents — his 2016 victory was against Paul Babeu, a county sheriff with a slew of legal troubles.

Now O’Halleran’s current slate of opponents include Ron Watkins, a notorious promoter of QAnon conspiracy theories; Walt Blackman, a state representative known for praising the Proud Boys, a far-right nationalist group; and Eli Crane, a Navy SEAL who called on the state legislature to “decertify” the 2020 election results.

“Literally, it’s one of the craziest assemblages of right-wing kookery that I’ve ever seen between the three of them,” said one Democratic strategist working on federal races in the state.

Like O’Halleran, Stanton also saw a huge drop in the Democratic performance of his district. Biden’s margin in his Phoenix area seat dropped from 23 to 10 points. Still, that’s winnable for Stanton in most cycles, and the Phoenix suburbs have been trending toward Democrats.