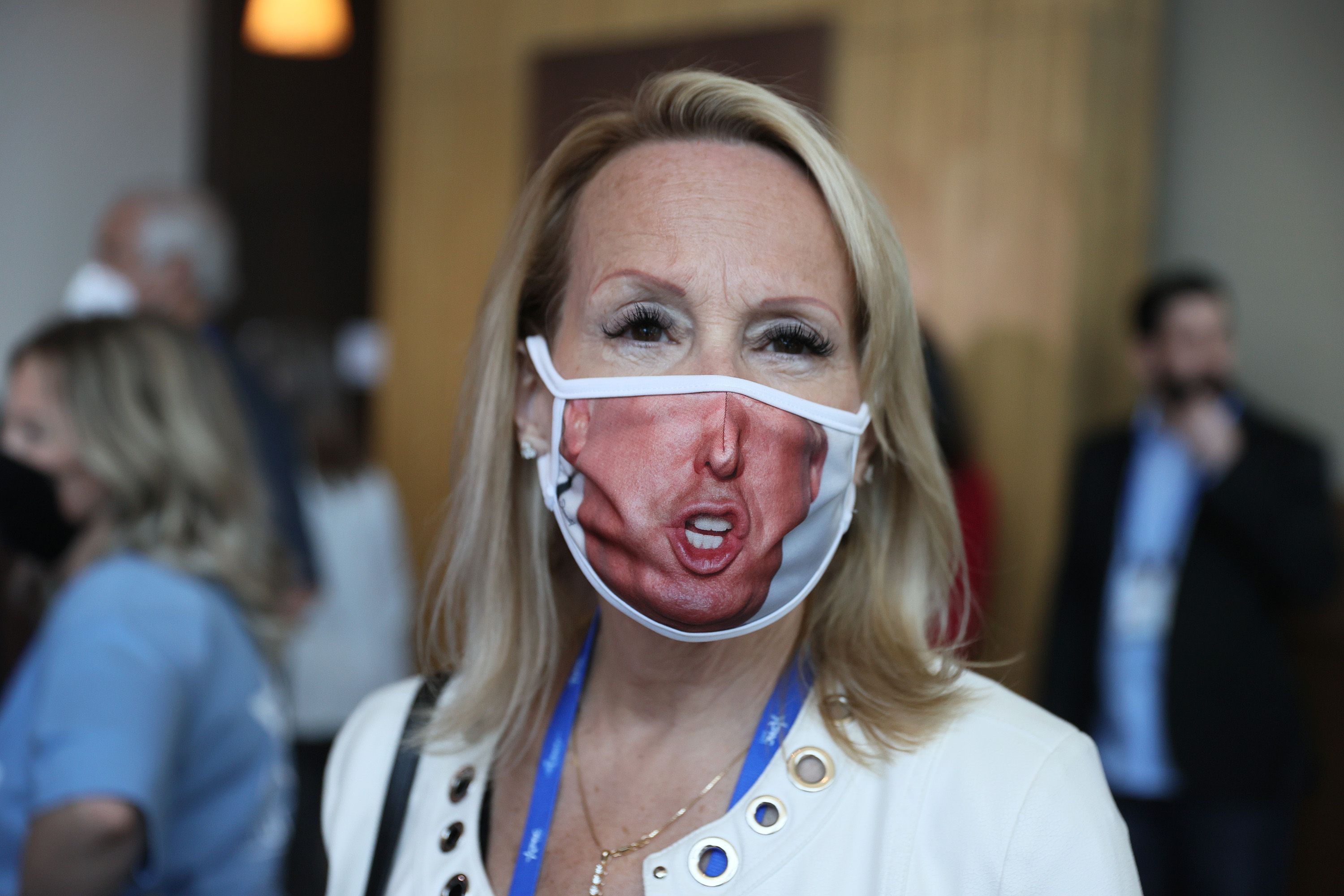 It’s been an eventful year to say the least. But when historians look back on images of all that’s happened, it’ll be easy to place 2021 in the Covid era if only for the ubiquity of one particular item of apparel.

As the coronavirus mutated, dragging out the pandemic as well as its polarizing precautions, it’s no wonder that so many have turned their masks into platforms for their politics. From members of Congress to protesters in the streets, people have used protective face coverings to make a statement.

POLITICO Magazine compiled a photo gallery of some of the most distinctive political masks across 2021. Together, these photos capture a remarkable year as new, high-stakes political fights collided with an ongoing, and still deadly, pandemic. 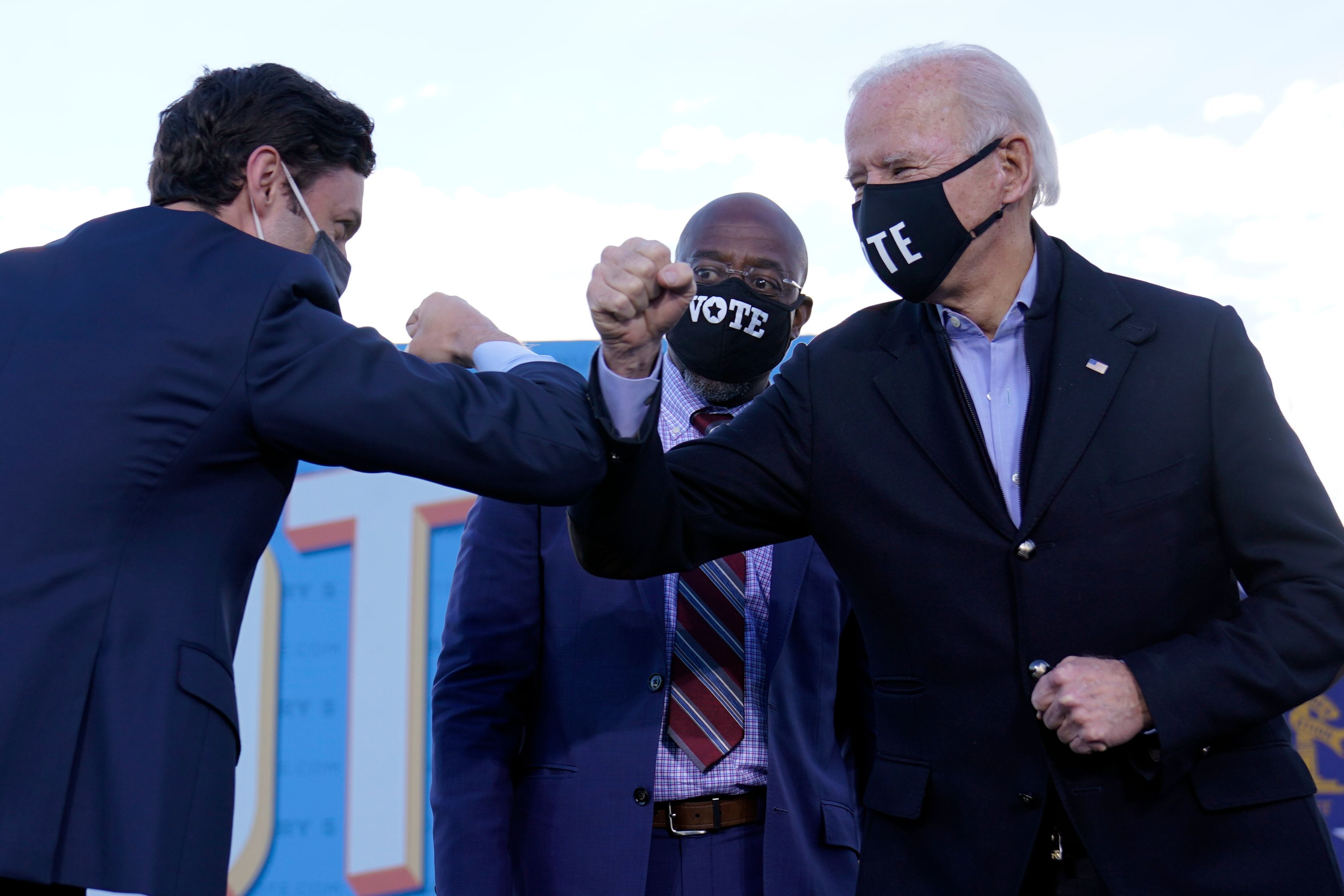 On Jan. 4, with control of the Senate hanging in the balance, President-elect Joe Biden campaigned in Atlanta with then-candidates Jon Ossoff and Raphael Warnock in Georgia’s two runoff elections. Biden and Warnock wore masks that said “Vote.” The next day, huge Black turnout delivered Democrats the narrowest of majorities. 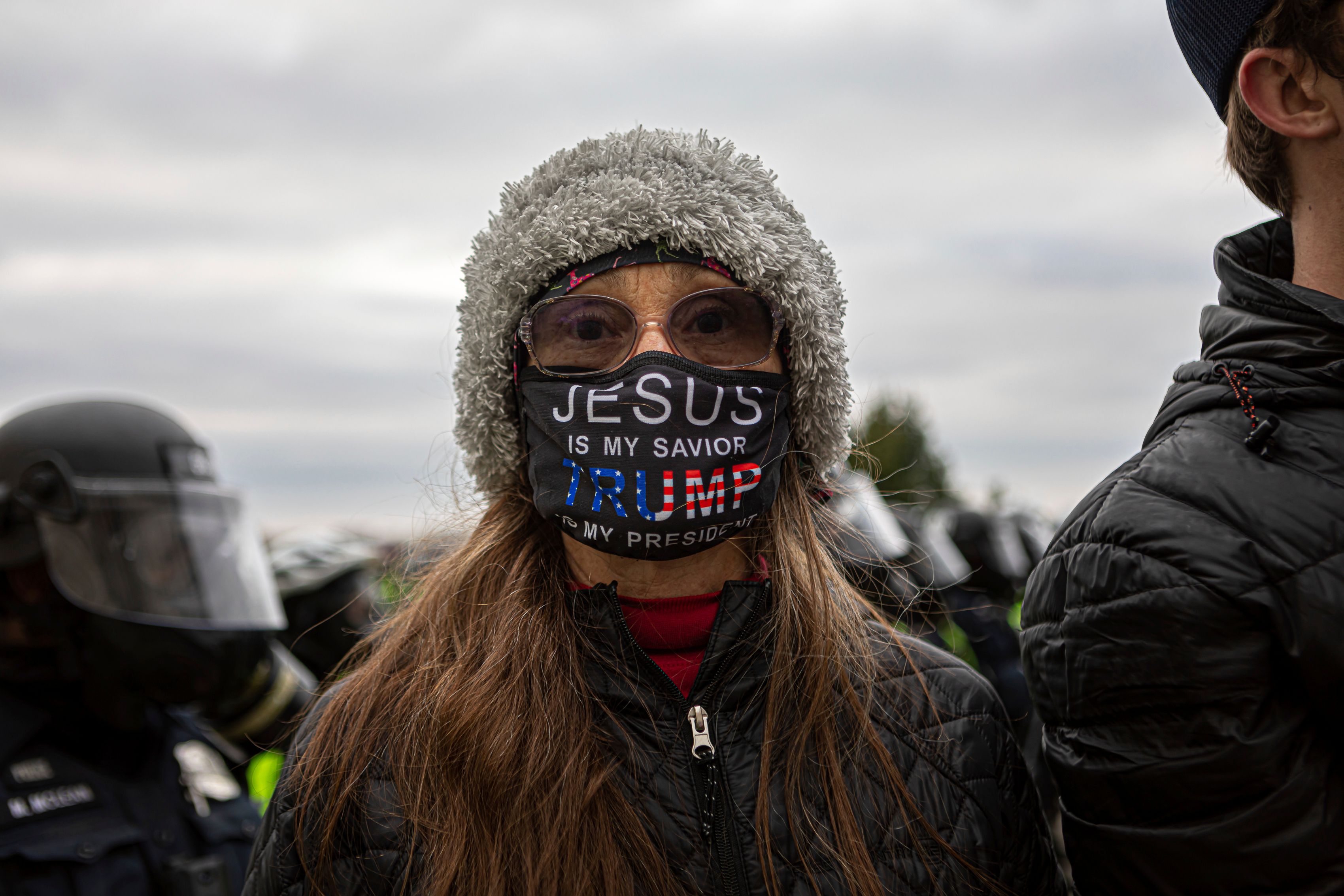 When hundreds of people rioted at the Capitol on Jan. 6, few were wearing masks at all, but the ones who were typically had American flag iconography or MAGA symbols on theirs. One woman’s mask read, “Jesus is my savior. Trump is my president,” as Congress certified Biden’s November election victory over Donald Trump. 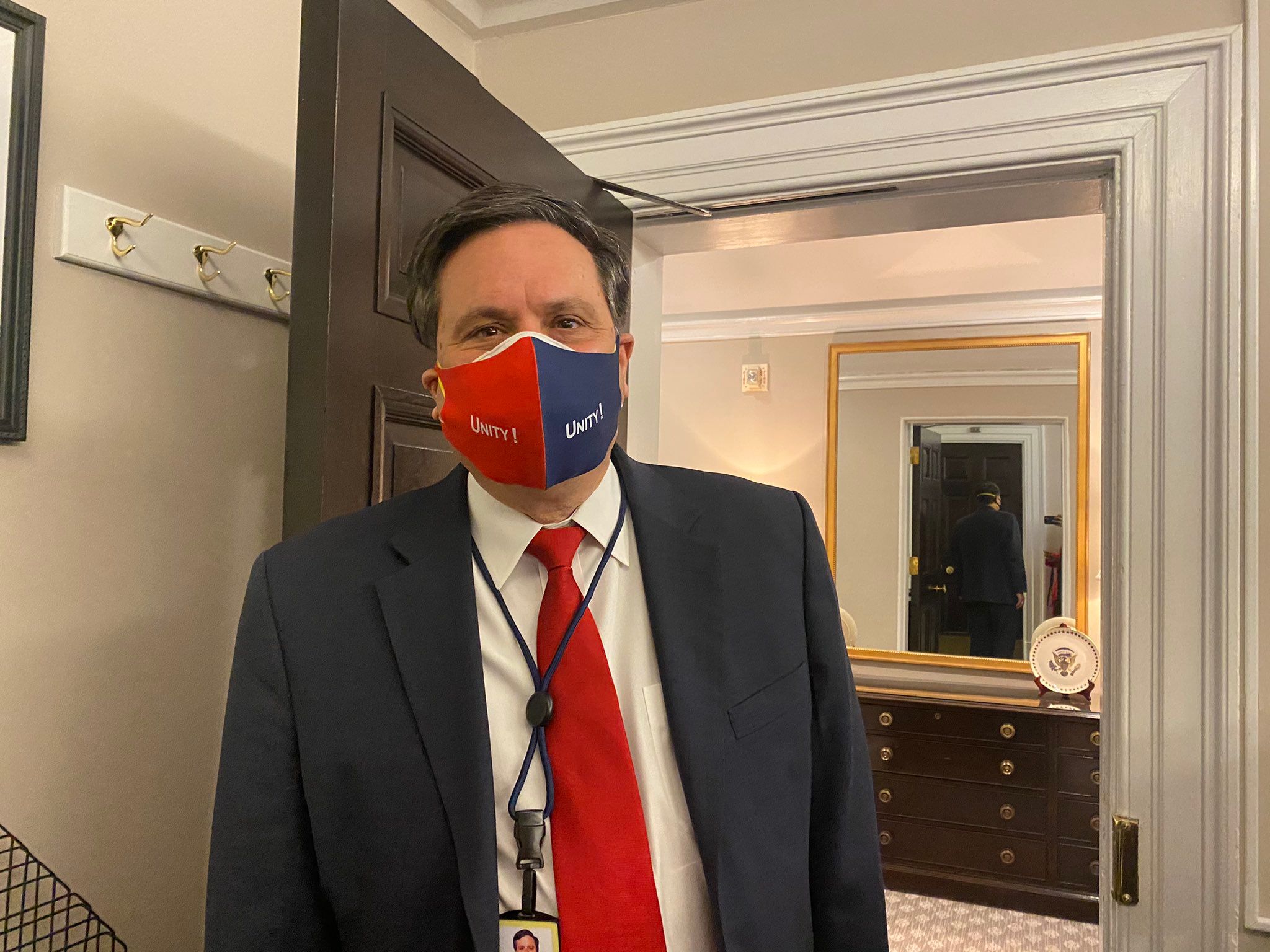 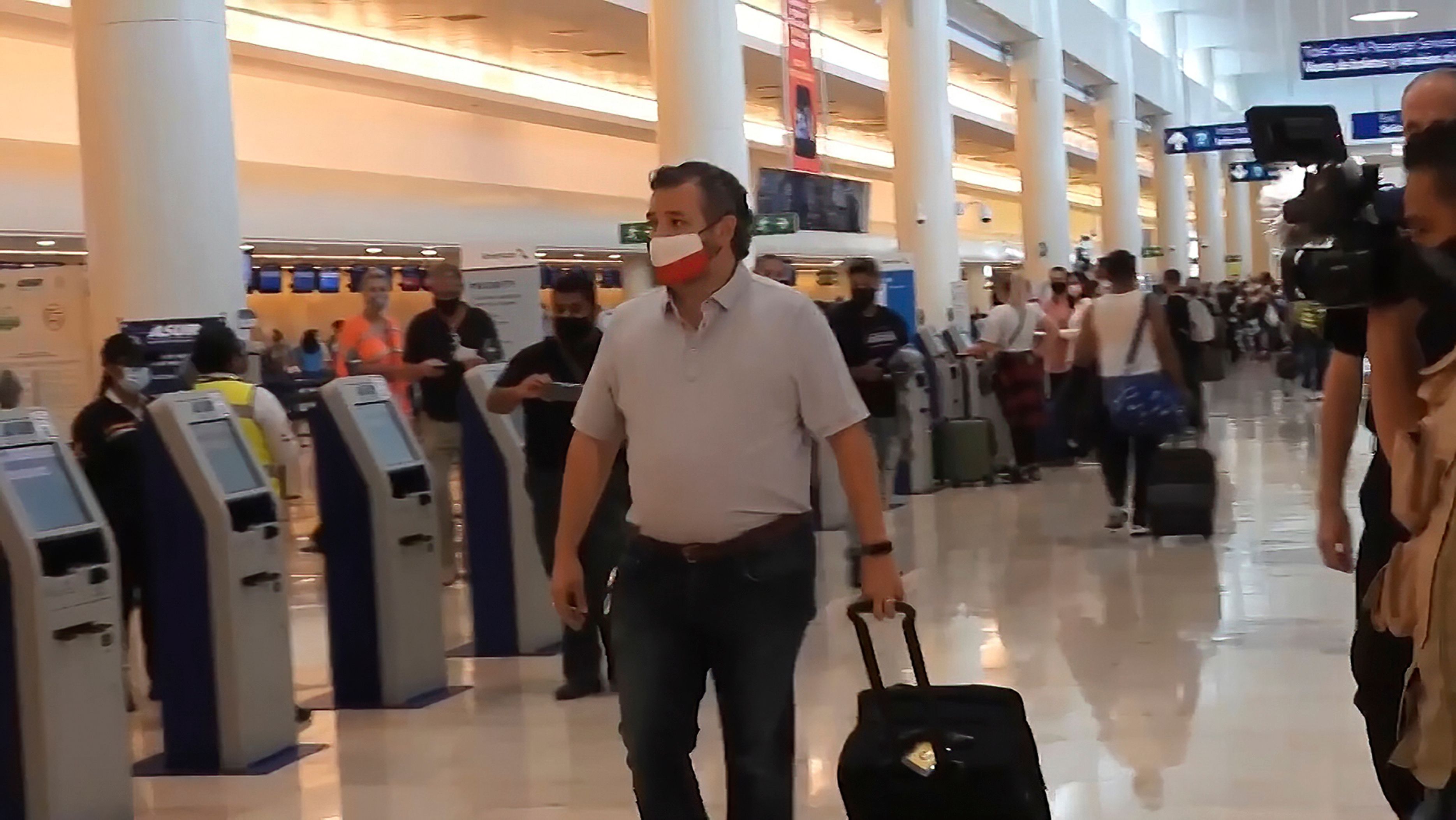 As Texas experienced a brutal winter storm in February, one of the state’s Republican senators, Ted Cruz, was caught heading on a trip to Cancun, Mexico. His mask, ironically, displayed the Texas flag. The image went viral, and amid intense backlash, Cruz vowed to quickly return to his home state that was facing its own disaster.

At this year’s Conservative Political Action Conference, which was held in Orlando to avoid coronavirus restrictions, organizers urged attendees to wear masks and were booed for it. Some people wore masks emblazoned with “freedom” — the word many shouted in retort to any request to wear a mask. Others used the additional item of clothing to further venerate Trump, the headliner of the event, who continued to push his election falsehoods. 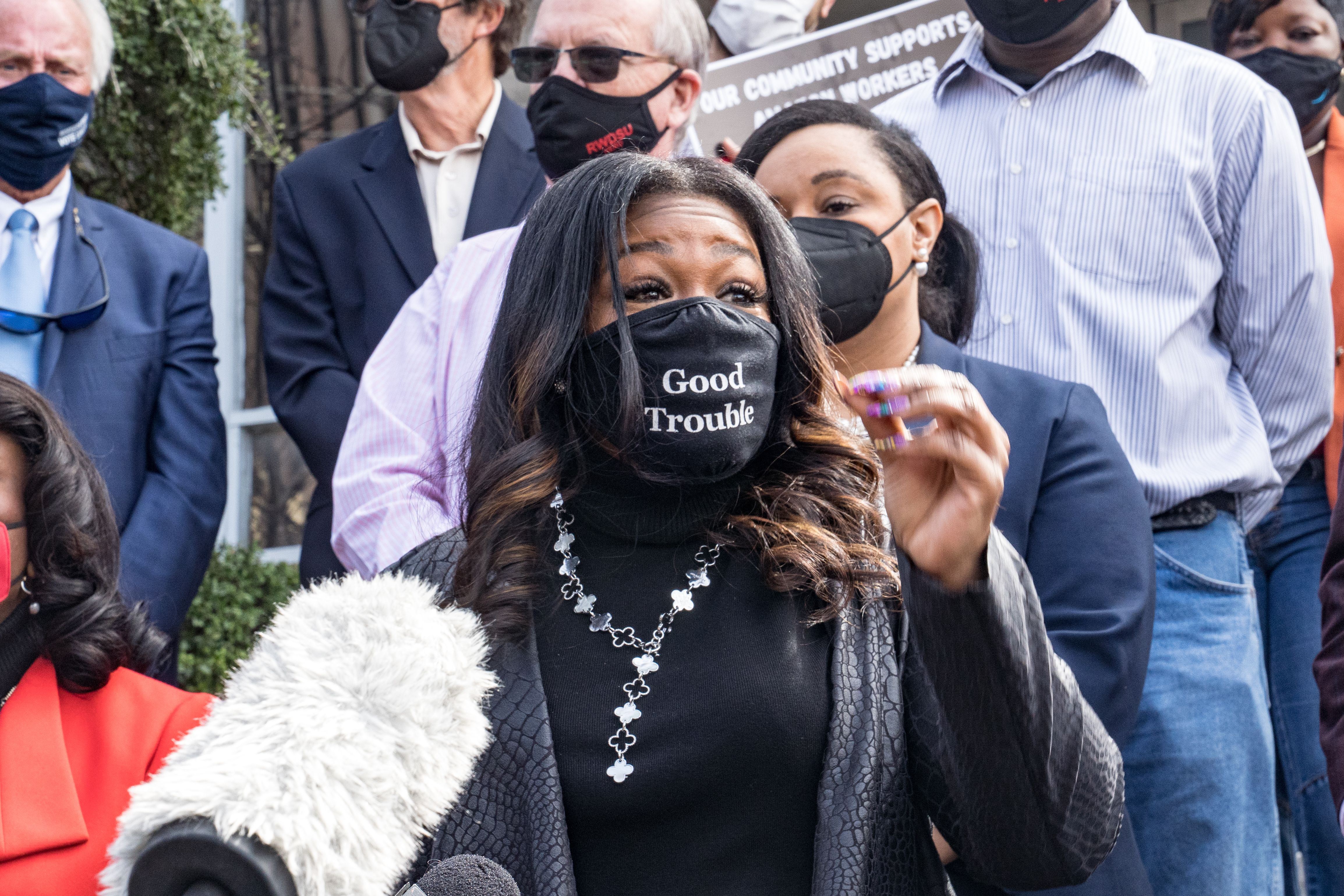 As Amazon workers in Birmingham, Ala., made a unionization push, several members of Congress came out to support them. That included the newly elected liberal Rep. Cori Bush (D-Mo.), who wore a “Good Trouble” mask bearing the message of the late civil rights activist Rep. John Lewis (D-Ga.). 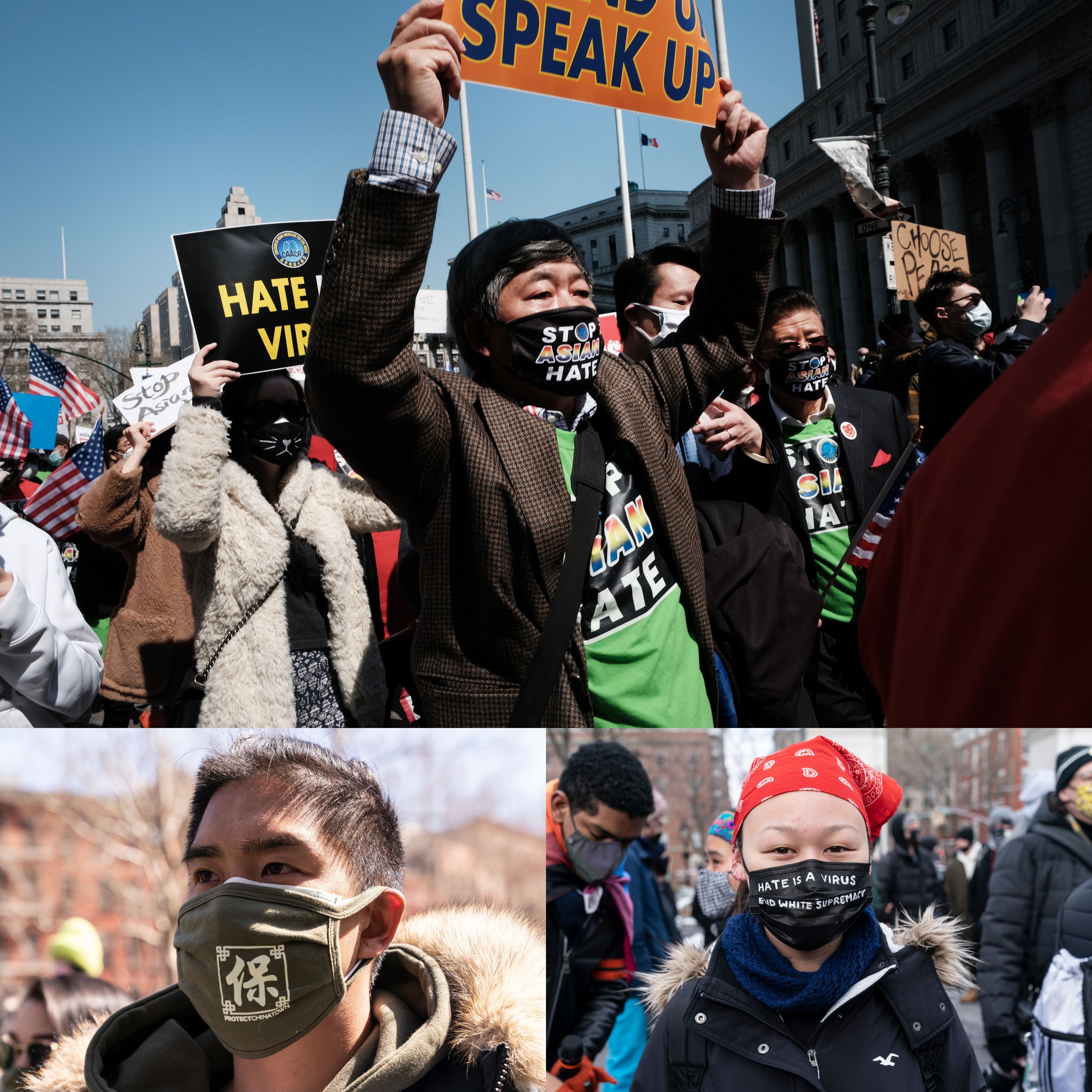 Across the country, members of the Asian American community and others in solidarity protested against anti-Asian violence after a noticeable rise in hate crimes against Asians during the pandemic. Multiple demonstrations took place in New York City, where people wore an array of messages on their masks, including “Stop Asian Hate” (top), the Chinese character for “Protect” (bottom left) and “Hate is a virus” (bottom right). 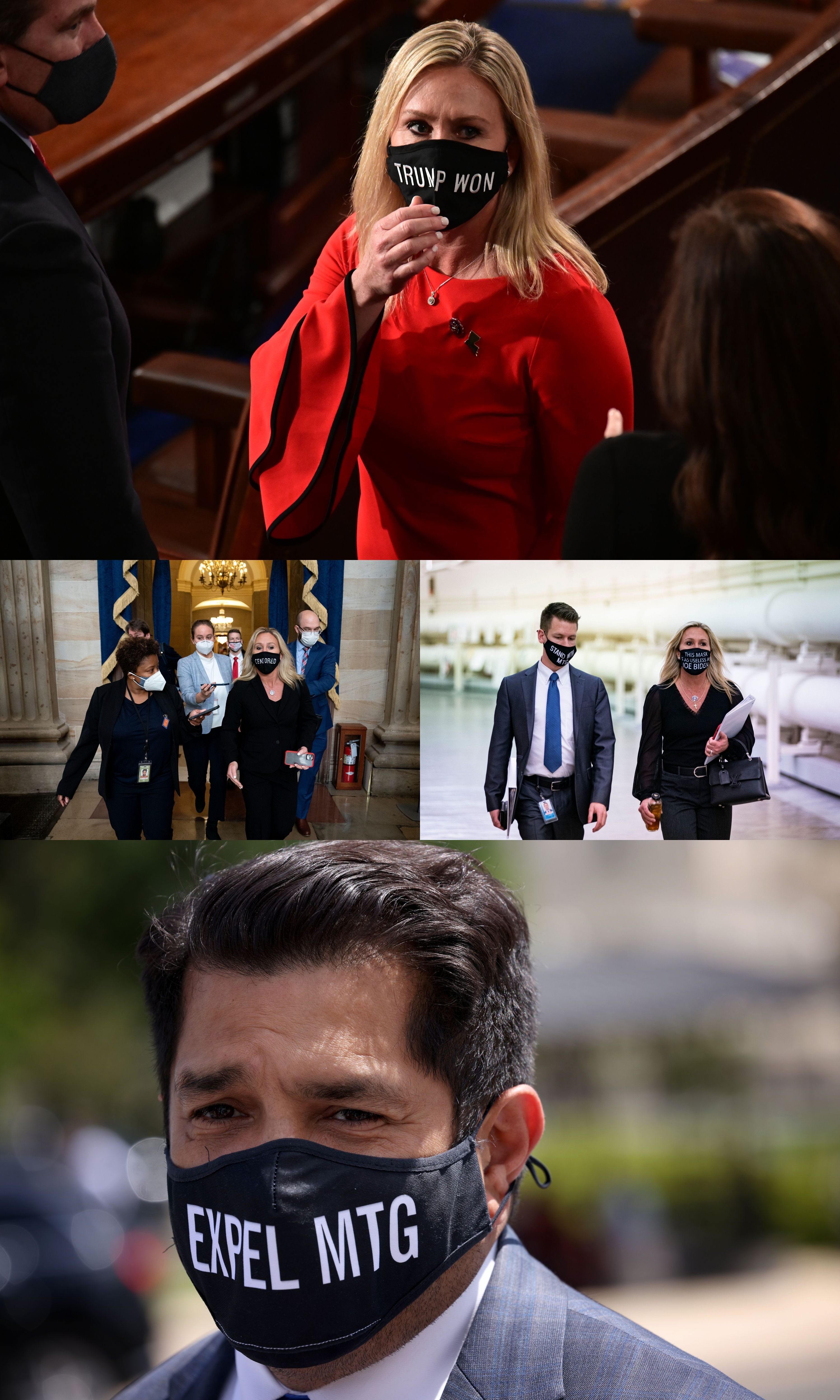 Despite racking up tens of thousands of dollars in fines for refusing to wear a mask on the House floor, Rep. Marjorie Taylor Greene (R-Ga.) was probably the member of Congress most fond of using a mask as a message board, displaying everything from “Trump won” on her first day on the job to “Stop the Steal” on Jan. 4, “Molon labe” (an ancient Greek phrase used by gun rights enthusiasts meaning “Come and take [them]”), “Censored” while speaking to the media, “End abortion,” “Reopen America,” “Free speech,” “America First,” “Impeach Biden” and “This mask is as useless as Joe Biden.” For several months, Rep. Jimmy Gomez (D-Calif.) pushed unsuccessfully for his colleagues to expel Greene from Congress, arguing that she has repeatedly endorsed dangerous extremism and political violence. In May, Gomez wore an “Expel MTG” mask to the Capitol. 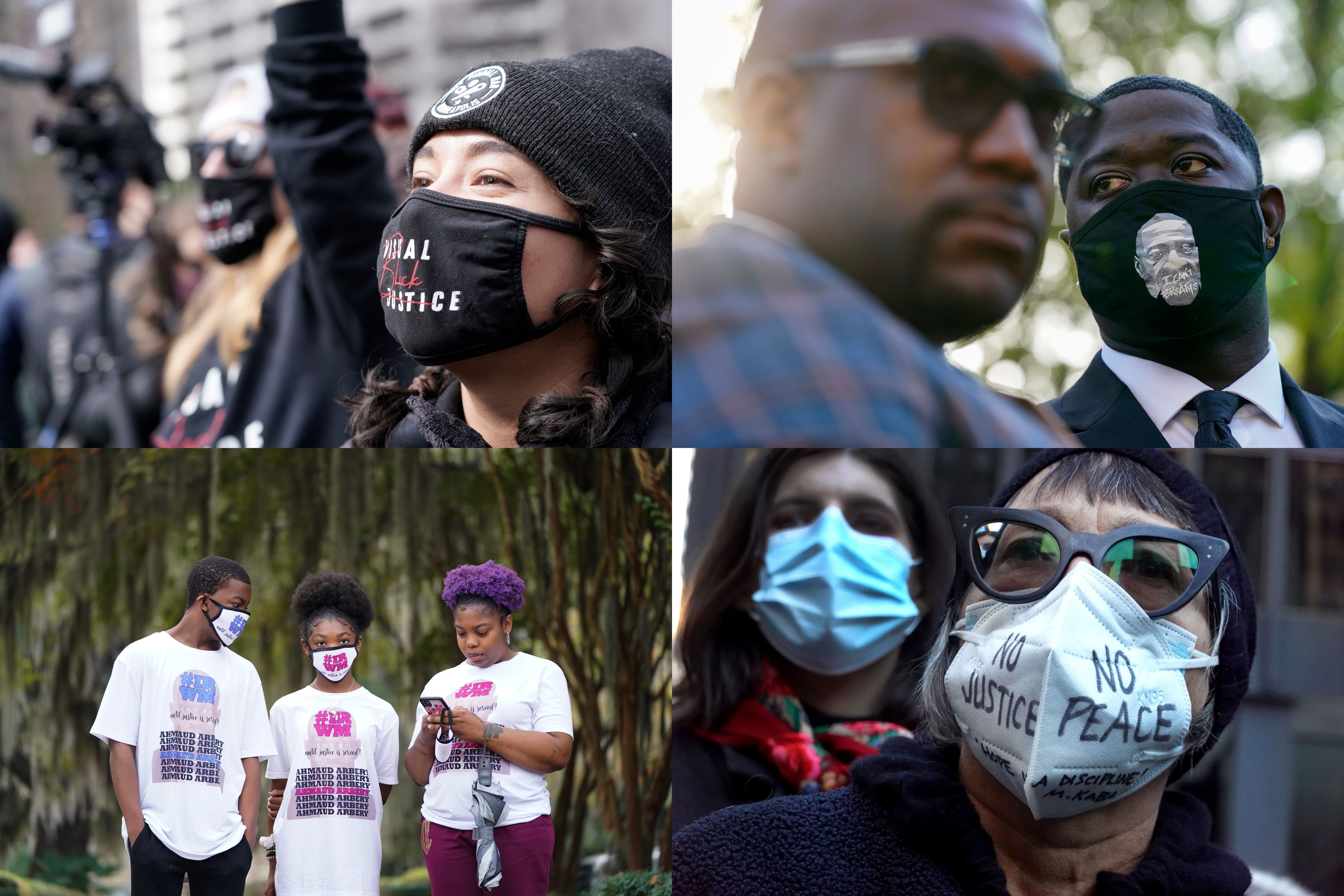 Top left: People in Minneapolis, including some with masks noting various activist organizations, cheered after the guilty verdict was announced at the trial of Derek Chauvin for the 2020 killing of George Floyd. Top right: At Black Lives Matter Plaza near the White House in May, Floyd’s nephew Brandon Williams (right) wore a mask with an image of Floyd on it, as he stood next to Floyd’s brother Philonise Floyd (left). Bottom left: A group outside the Glynn County, Ga., Courthouse in November wore masks with the hashtag “#IRWM” (I run with Maud) as three men were charged with the 2020 killing of Ahmaud Arbery while he was jogging. Bottom right: A woman at a rally in Chicago to protest the not-guilty verdict of Kyle Rittenhouse — who shot three men, killing two, during unrest in Kenosha, Wis., last year — wears a “No justice, no peace” mask. 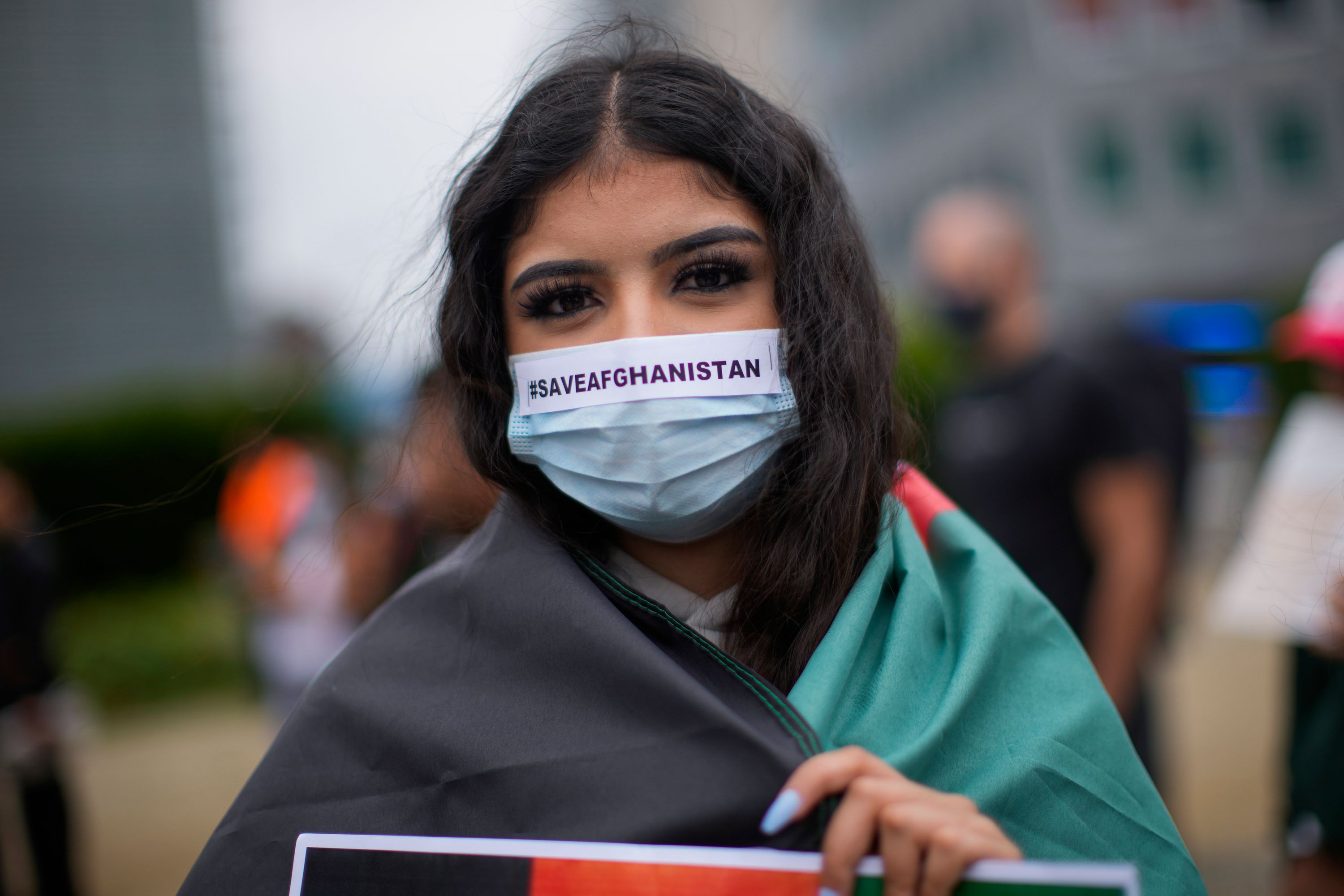 After the fall of Kabul on Aug. 15, as American troops withdrew from Afghanistan, protesters around the world expressed concern for the plight of Afghan citizens, particularly women, under Taliban rule. Above, a woman at a demonstration in Brussels appended the message “#SaveAfghanistan” on her mask. 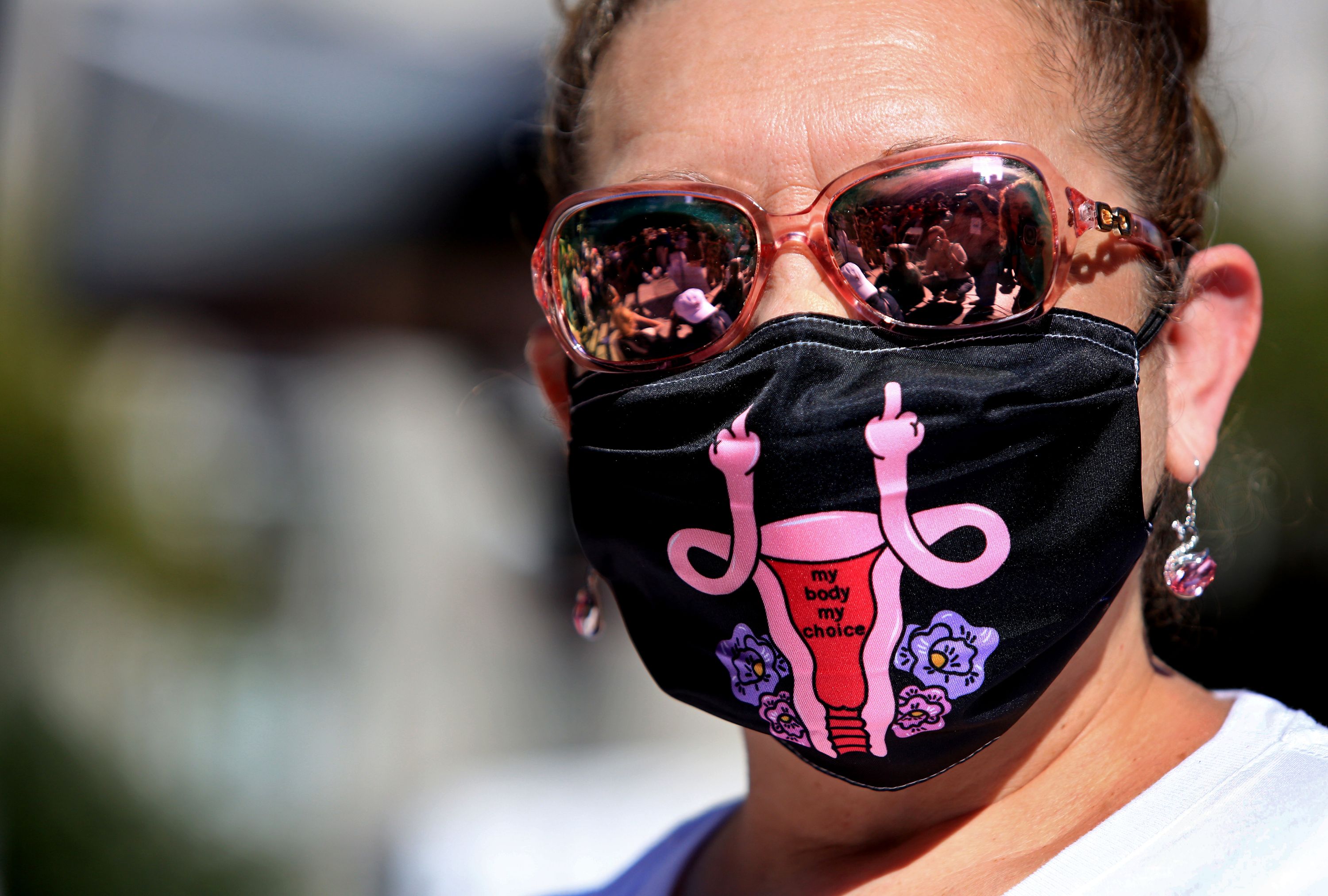 A woman at a Women’s March in New York City on Oct. 2 wears a mask featuring a uterus with the slogan “my body my choice” and cartoon fallopian tubes giving the middle finger. Across the country, demonstrations took place in protest of a new strict anti-abortion law in Texas and in anticipation of the conservative-leaning Supreme Court’s hearing of a case on abortion that could overturn Roe v. Wade. 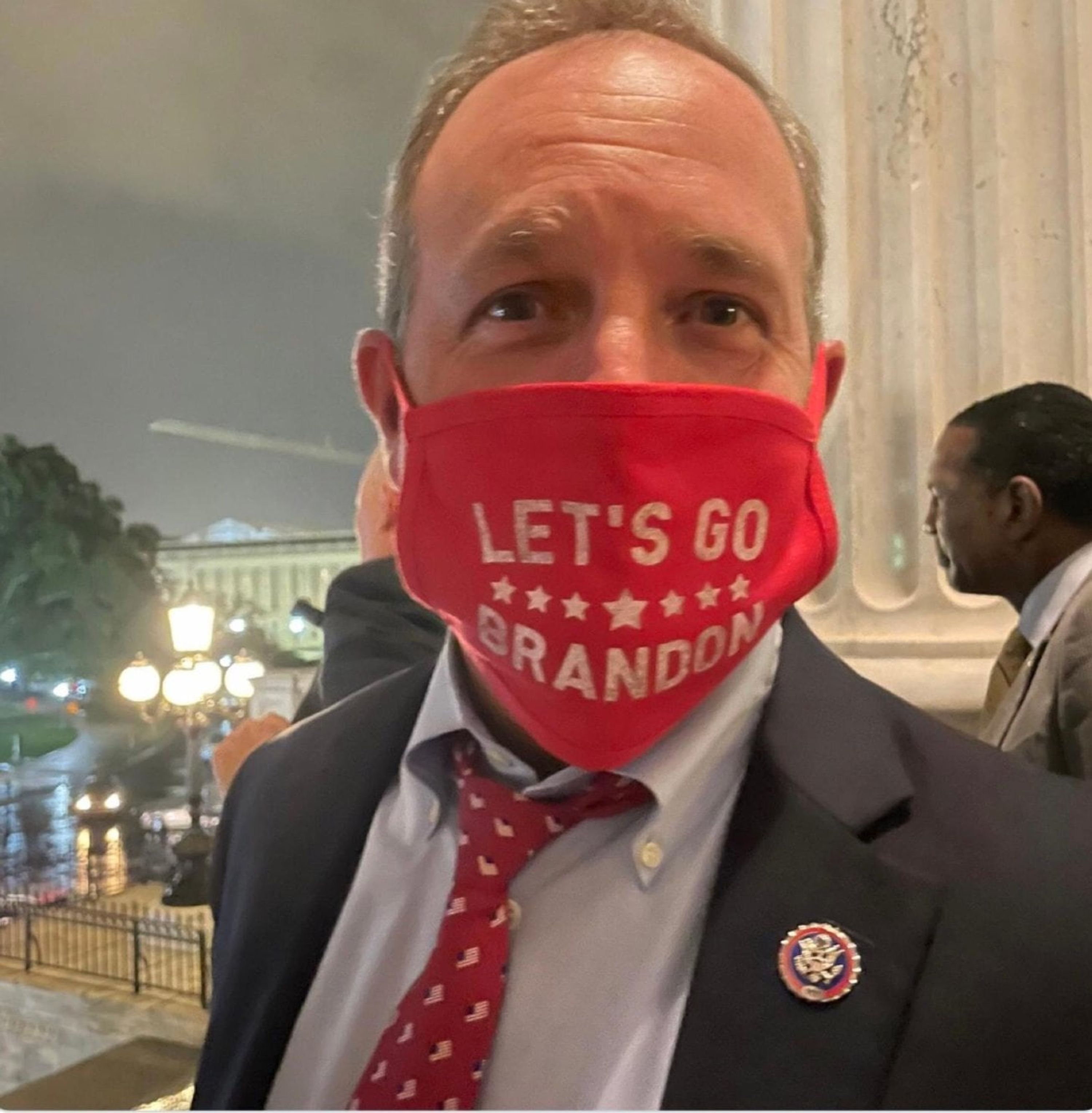 In late October, Rep. Jeff Duncan (R-S.C.) wore a “Let’s Go Brandon” mask at the Capitol. The slogan is a not-so-secret right-wing code for “F— Joe Biden.” Duncan posted the photo of himself wearing the mask on social media, writing: “The American people are furious at Joe Biden’s presidency, and rightfully so. I stand with them. … C’mon Brandon.” 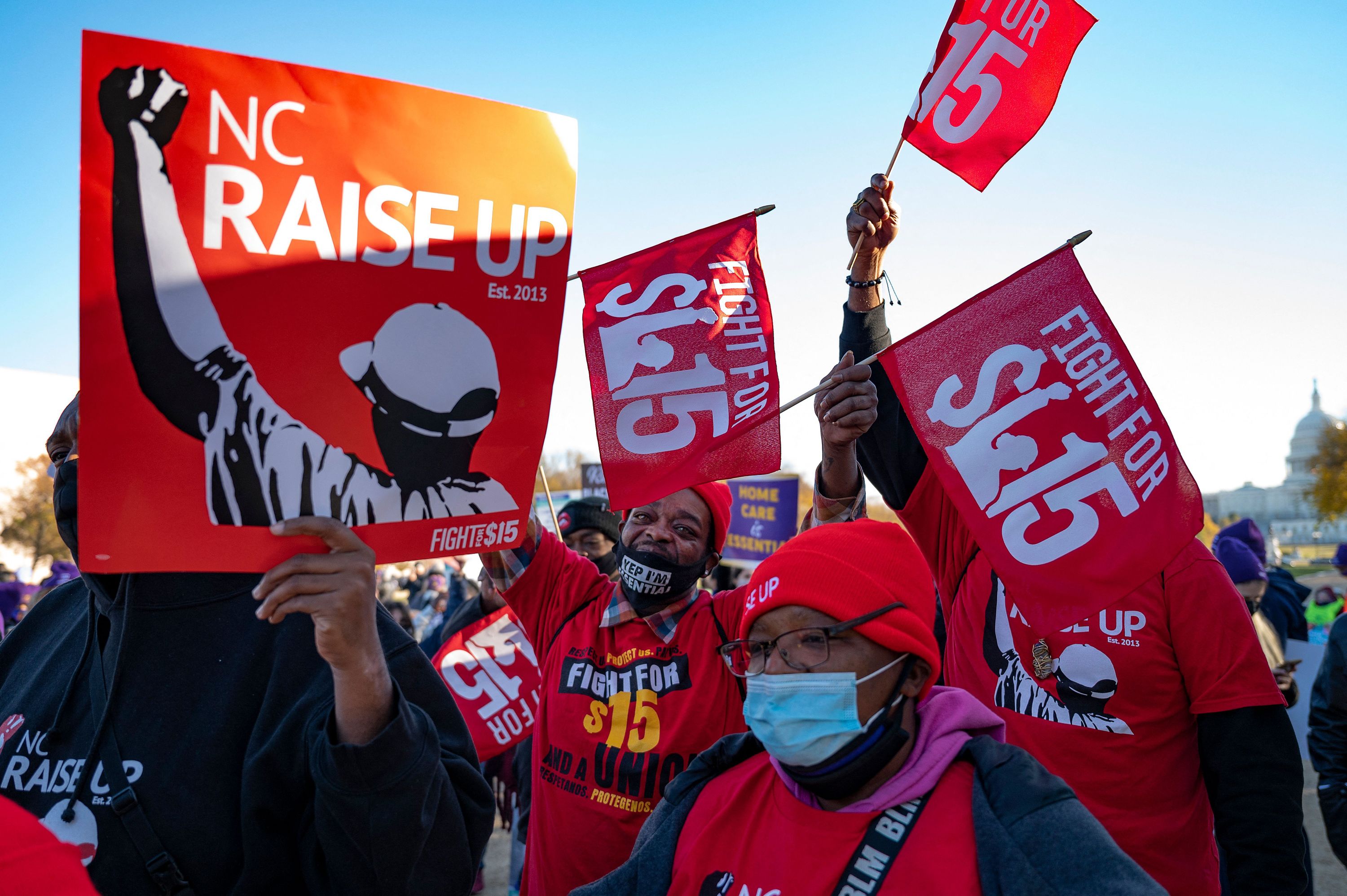 The Build Back Better plan, Biden’s big social spending bill that underwent endless negotiations in Congress this year and may never pass, was the subject of many demonstrations in Washington by groups pushing their favored policies — from clean energy to child care to student debt relief. In mid-November, one demonstrator with a North Carolina-based group advocating for a higher minimum wage wore a mask that stated, “Yep I’m Essential.”